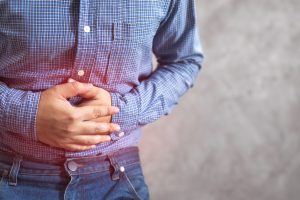 Living with IBS can present all kinds of challenges, only one of which might be what you eat.

Of course it makes sense to things irritable bowel syndrome is all about food. After all, the symptoms are all gut-related and for many, turn to their worst directly after eating.

If you’re living with IBS you’re likely familiar with the low-FODMAP diet. It’s basically built around the idea that short-chain carbohydrate are poorly absorbed by people with IBS, leading to bloating, diarrhea, or other digestive troubles.

But going low FODMAP can also leave plenty of nutritious foods out, and it can also be complicated and frustrating. Along with FODMAPs, gluten and dairy, among a few others, are also linked to IBS symptoms.

There is research to back up the links to FODMAPS and other food groups to IBS flare-ups. But now a new study, published in the Journal of Clinical Nutrition, suggests that foods may play far less of a role in IBS than most think.

The study, which only featured 110 people with IBS, found that cutting gluten and FODMAP’s didn’t really provide a lot of relief from symptoms.

To get their results they split the participants into two groups: one completely cut gluten and FODMAPS and the other didn’t.

They found gluten had virtually no impact on symptoms and that FODMAPs had much less of an effect than previously thought.

What the study does show, however, is that managing IBS may be about far more than food.

Other factors that can influence symptoms and symptom severity may include:

Finding ways to manage stress with exercise, taking a relaxing bath, mediations, or breathing exercises – whatever it looks like for you – may help.

For some, stress may even come from eating.

Sleep: There is data to support the theory that sleep can influence gut health and IBS symptoms. Trying to improve sleep may help reduce stress levels and improve symptoms.

Medication: Some medications, including pain and cough medications, along with anti-depressants, may contribute to IBS symptoms.