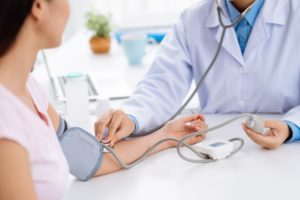 High blood pressure should be a concern at any age, but new research shows that it could be a significant marker of dementia if experienced in midlife. This new information suggests that maintaining healthy blood pressure throughout life may be one way to help decrease the risk of cognitive decline, including dementia.

In a study from John Hopkins that spanned two and a half decades, evidence was presented that abnormal blood pressure in midlife persisting into late life increases the likelihood of developing dementia. Looking at data from more than 4,700 participants, the study was not designed to show cause and effect. However, the findings suggest that maintaining a healthy blood pressure may be useful in decreasing brain function in later years.

For the study published in JAMA, it was found that those with hypertension during middle age and later in life were 49 percent more likely to develop dementia than those with normal blood pressure readings at both stages in life. It was also shown that more significant risk of dementia was occurring in those who just had high blood pressure in middle age and lower in later life. This increased dementia risk by 62 percent. Middle-aged was considered 48 years to 67 years old.

Walker explains that “dementia itself may lead to a lowering of blood pressure, as it may disrupt the brain’s autonomic nervous system.”

Lead researcher Dr. Rebecca Gottesman, an associate professor of neurology and epidemiology at Johns Hopkins University School of Medicine in Baltimore, did find that people whose blood pressure was controlled with medication had less mental decline than those with uncontrolled high blood pressure.

However, she stressed that because “we know how to treat high blood pressure,” bringing it under control might also cut a person’s risk for dementia.

High blood pressure is usually the outcome of a poor diet and not enough exercise, but it can also be genetic. As people age, their blood pressure does usually change due to structural changes in the blood vessels. But the effects of aging on blood pressure can be reduced through daily exercise and a healthy diet.