Home » Health News » Lying about Santa may be harmful for children 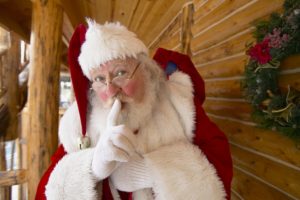 With Christmas one month away, children are writing up their wish lists to give to Santa. This long-running tradition has been passed down from generation to generation, but is it a good one to keep? Psychologist Christopher Boyle and mental health caregiver Kathy McKay believe that the lie about Father Christmas’ existence may actually be damaging to children.

Boyle and McKay suggest that parents’ relaying the lie about Santa is not meant to create magic for children, but rather it is more about returning to the joy of childhood for themselves. The study suggests that children’s trust may be compromised as a result of the Santa lie.

The researchers wrote, “If they are capable of lying about something so special and magical, can they be relied upon to continue as the guardians of wisdom and truth?”
Boyle explained, “The morality of making children believe in such myths has to be questioned. All children will eventually find out they’ve been consistently lied to for years, and this might make them wonder what other lies they’ve been told. Whether it’s right to make children believe in Father Christmas is an interesting question, and it’s also interesting to ask whether lying in this way will affect children in ways that have not been considered.”

He wrote, “An adult comforting a child and telling them that their recently deceased pet will go to a special place (animal heaven) is arguably nicer than telling graphic truths about its imminent re-entry into the carbon cycle.”

Dr. McKay added, “The persistence of fandom in stories like Harry Potter, Star Wars, and Doctor Who well into adulthood demonstrates this desire to briefly re-enter childhood.”

The researchers concluded, “Many people may yearn for a time when imagination was accepted and encouraged, which may not be the case in adult life. Might it be the case that the harshness of real life requires the creation of something better, something to believe in, something to hope for in the future or to return to a long-lost childhood a long time ago in a galaxy far far away?”