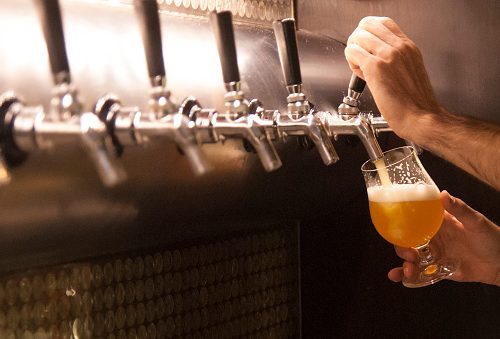 A new study has found that lowering the percent of alcohol in alcoholic beverages may help reduce the harmful effects of drinking. The World Health Organization suggests that nearly a quarter of deaths among those aged 20 to 39 are a result of alcohol.

Researcher Jurgen Rehm said, “The idea is that a small reduction in alcohol — such as beer with four percent ethanol content versus six percent — would reduce alcohol intake per drinker even if the same overall amount of beverage is consumed.”

The researchers found that lower levels of ethanol would contribute to lower blood alcohol levels, which could reduce the immediate risk of accidents and injuries and alcohol-related disease later on.
The analysis even suggests that drinkers wouldn’t notice the lower alcohol content and thus wouldn’t drink more to compensate. Rehm added, “We know from experiments that consumers can’t distinguish between beers of different strengths.”

In Australia, there are taxes placed on beverages that contain over three percent ethanol, giving rise to a larger assortment of weaker beer varieties. Such taxation policy encourages the brewers to produce beer with lower alcohol content to avoid the tax. Rehm explained, “The proposal presents a unique situation, where public health interests in reducing alcohol consumption is not in conflict with the alcohol industry.”

Meanwhile, alcoholic beverages should always be consumed in moderation and only by persons of the legal drinking age.