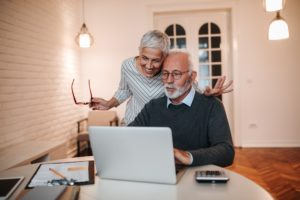 Mild cognitive impairment affects approximately 15 to 29 percent of people aged 65 or older, but a new study is helping to show what can lower the risk. Stimulating activities such as using a computer, crafting, playing games, and participating in social activities are linked to lower risk or delay of age-related memory loss.

While other studies have previously shown this connection, this new research is one of the first to find that the timing and number of activities play an important role in reducing the risk of mild cognitive impairment. The study was published in the July 10, 2019, online issue of Neurology, the medical journal of the American Academy of Neurology.

Mild cognitive impairment (MCI) is a condition that is linked to thinking ability and memory. Although many people confuse MCI with dementia, it is not the same. It is milder than dementia, and those with MCI may struggle to complete complex tasks or have difficulty understanding the information they have read. Whereas dementia patents have problems completing daily tasks such as getting dressed, bathing and eating.

Those with MCI are more likely to develop Alzheimer’s disease or other dementias than people with MCI. However, receiving a diagnosis of MCI does not always mean that it may lead to dementia. In some individuals, MCI reverts to normal cognition or remains stable.

Study author Yonas E. Geda of the Mayo Clinic in Scottsdale, Ariz., and a member of the American Academy of Neurology, spoke about the research. “There are currently no drugs that effectively treat mild cognitive impairment, dementia or Alzheimer’s disease, so there is a growing interest in lifestyle factors that may help slow brain aging believed to contribute to thinking and memory problems — factors that are low cost and available to anyone. Our study took a close look at how often people participated in mentally stimulating activities in both middle-age and later life, with a goal of examining when such activities may be most beneficial to the brain.”

Activities during Middle Age and Later in Life

For the study, Geda and his team identified 2,000 people who did not have MCI. They had an average age of 78 years. At the start of the study, participants completed a questionnaire which covered how often they took part in mentally stimulating activities. It was specifically looking at the activities during middle age and later in life, defined as aged 66 years or older. During the study, participants were given thinking and memory tests every 15 months and were followed for an average of five years.

“Our study was observational, so it is important to point out that while we found links between a lower risk of developing mild cognitive impairment and various mentally stimulating activities, it is possible that instead of the activities lowering a person’s risk, a person with mild cognitive impairment may not be able to participate in these activities as often,” Geda said. “More research is needed to further investigate our findings.”