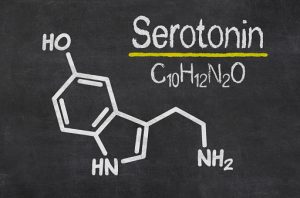 Serotonin, a chemical that occurs naturally in our brain, helps regulate our mood, appetite, memory, and sleep, but some people are serotonin deficient and require low serotonin treatment.

Serotonin, a chemical that occurs naturally in our brain, helps regulate our mood, appetite, memory, and sleep, but some people are serotonin deficient and require low serotonin treatment.

There are several reasons a person may have low serotonin levels. If you are vitamin B6 deficient, that can affect serotonin production. This is because B6 helps synthesize serotonin. Serotonin is synthesized from an amino acid called tryptophan, so if you have low dietary levels of L-tryptophan, your serotonin may be low. There are some foods that contain L-tryptophan, such as poultry, nuts, and dairy products. There have also been studies suggesting that an amino acid in certain tea leaves can impact serotonin levels. That amino acid is theanine, and it can enter the brain and affect the release of serotonin.

There are a number of different health conditions that are related to low serotonin levels. Thankfully, they don’t automatically translate to a serotonin deficiency. Still, research has shown that many of the following conditions can improve when serotonin levels increase.

If you feel your mental performance is impaired, you’re having difficulty sleeping, or find it hard to function in social situations, you might be one of many who suffers from low serotonin levels. There are a number of ways how to increase serotonin levels naturally. In addition to traditional medical interventions that can boost serotonin, there are natural remedies for low serotonin. For some people, the answer is simply a low serotonin diet.

Consuming more foods that are rich in tryptophan can be a good approach. Eggs, cheese, tofu, and pineapple are good options. Carbohydrates make tryptophan more available, so they should not be overlooked. Micronutrients are also essential to physiological processes. Eating grain-like seeds, such as buckwheat, quinoa, and amaranth can also help boost serotonin. The grain-like seeds provide important B vitamins, which play an important role in brain health.

Including foods that are high in protein, especially those that have a higher tryptophan percentage, would be wise. This includes turkey, sunflower seeds, and pumpkin seeds. It is best to get proteins from grain-like foods as opposed to animal proteins, since high animal proteins do not help create more serotonin.

Medications are the easiest and quickest way to increase serotonin levels. Most of the prescribed drugs that target the serotonin system in our body are called SSRIs. They have been known to be effective at increasing extracellular serotonin in a short period. Low serotonin is also treated with atypical antidepressants and tricyclic antidepressants. As is the case with any kind of traditional medications, there can be adverse side effects.

Although serotonin is often referred to as the “mood molecule” or the “happy molecule,” its relationship with our body is not all about the brain, which makes balancing it so important. A large percentage of serotonin is in our gastrointestinal tract and therefore is involved in helping to regulate our bowels. It is in our central nervous system, our cardiovascular system, our endocrine system, and even our muscles. Having low serotonin levels can lead to all sorts of health problems.

There are many ways of how to increase serotonin levels naturally, and safely. If you are feeling agitated, or you can’t sleep, or you are just simply stressed, naturally increasing your serotonin levels can go a long way to making you feel better. Knowledge is the key to managing your health, and in the case of serotonin, it is important to understand how the hormone works in the body, and how to treat it without the intervention of drugs. If you have questions or concerns about your serotonin levels, have a discussion with your doctor as soon as possible.