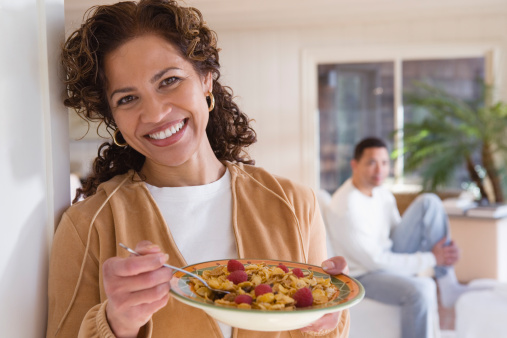 Research out of the University of Eastern Finland is adding strength to the theory that “we are what we eat.”  A student at the University has presented her doctoral thesis in the field of nutritional epidemiology and has concluded that a healthy diet can reduce the risk of depression.

The research conducted a follow-up with approximately 2,000 men, showing that weight loss was linked to a reduction in symptoms associated with depression. The data came from a population-based Heart Disease Risk Factor Study. The men were middle-aged and were tracked in the study over a period of 13 to 20 years.

For the study, healthy food and unhealthy food habits were measured through food records and frequent questionnaires. Information on depression was gathered from the National Hospital Discharge Register in Finland.

What is a Healthy Food?

Nutritional experts describe a healthy diet as one that includes healthy foods such as fresh fruits, vegetables, whole grains, low-fat cheese, and fish. These are all sources of folate. A lot of research shows that depressive patients are low in folate. This vitamin is essential for cell growth and is at the center of a lot of scientific investigation when it comes to brain activity.

Sugary snacks, the consumption of a lot of processed meats, sausages, processed foods, sugar-filled desserts, rolls, as well as sugary drinks are less healthy diet choices. Consumption of such food items has been associated with an increase in symptoms of depression.

The doctoral thesis seems to support previous studies conducted at Universities around the world, but the research on depression and healthy food has been controversial. In 2012, scientists from the University of Granada concluded that eating commercially baked goods, such as cakes and doughnuts, as well as fast food are linked to depression. They went as far as to say that those who eat fast food regularly are 51 percent more likely to develop depression than those who eat little to no fast food.

The scientific journal, PLosONE, has also published the results of a study highlighting the importance of good diet in adolescence and its potential role is preventing mental disorders.

Over the years, several scientific and nutritional studies have suggested that weight loss, particularly in those who have been obese, can lead to decreases in depression. Furthermore, in recent years, more and more evidence seems to suggest that weight loss can be beneficial for the mind. One of the most well-known organizations for research on eating and drinking behavior, the Society of Ingestive Behavior, discovered that after a 6-month weight loss session, patients who were depressed and lost 8 percent of their initial weight reported significant decreases in their symptoms of depression.

The Society research and the Finland doctorate are just small contributions to the ongoing research linking diet and depression. Depression is the most common mental disorder in the world, with over 350 million people of all ages suffering from depression. Doctors encourage researchers everywhere to dig deeper into the science of depression in an effort to find ways to curb it, as well as maintaining a balanced diet full of healthy foods.