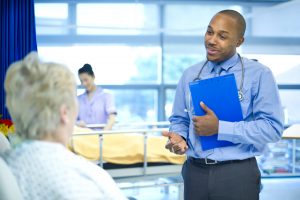 According to a new study presented at the ANESTHESIOLOGY 2021 annual meeting, patients who experience low blood pressure during surgery are at risk for postoperative delirium.

Postoperative delirium is a change in mental function that can cause confusion after surgery. It’s the most common surgical complication for older adults and it can be caused by various factors, including insomnia, anxiety, pain, and stress.

The study included 316,717 patients who had noncardiac surgery at one of two hospitals between 2005 and 2017. Of the patients, 2,183 were diagnosed with delirium within 30 days after surgery. It was noted that of those patients, 41.7% had an average systolic and diastolic blood pressure below 55mgHg during the surgery for fewer than 15 minutes. Out of these patients, 2.6% had it for longer than 15 minutes.

It was concluded that patients who experienced low blood pressure were up to 60% more likely to experience postoperative delirium. The effects were found to be magnified in patients who had longer surgeries.

Postoperative Delirium In the Elderly

Postoperative delirium can affect anyone, but elderly patients have been found to be at the highest risk. It can typically last one to three days after surgery, but some patients may experience long-term memory loss, difficulty learning, thinking, and concentrating.

The senior author of the study Dr. Eikermann said, “Physician anesthesiologists measure patients’ blood pressure at least every three minutes during surgery. The study shows they can help decrease the risk of postoperative delirium by immediately providing medication to increase blood pressure when it falls.”

Postoperative delirium is a condition that can be a major obstacle to a quick recovery from surgery. It can lead to patients having to be more dependent on others for daily living. Researchers also believe that it could lead to an accelerated cognitive decline.

While previous small studies have been inconclusive, this new study has been able to outline the link between mental health and low blood pressure. It’s believed that low blood pressure decreases the supply of oxygen and glucose to the brain, causing delirium and other cognitive issues in the future.

More studies are needed to add to the evidence found by these researchers. Patients who have experienced long-term cognitive effects after surgery may have suffered a drop in blood pressure during their operation.