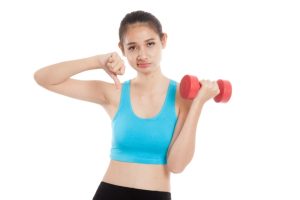 Lead researcher Rodney Dishman explained, “Variation in genes for dopamine receptors, as well as some other neural signaling genes, help explain why about 25 percent of the participants drop out of exercise or don’t exercise at the recommended amount. Combined with personality measures, we think these genes may help explain why some people have a natural urge to be active, while others never do.”

Even if you are among those who are genetically predisposed not to enjoy exercise, you can still overcome this hindrance and partake in a healthy lifestyle that includes a good measure of physical activity.

Registered dietician Dori Arad added, “Genetics is very, very important, but nothing is written in stone. You can decide to be active and move and do exercise, and in essence you can rewrite your brain so that exercise becomes pleasurable and rewarding.”


Dr. Keri Peterson, an internist with Lenox Hill Hospital, commented on the study saying, “Dopamine is a chemical in our brains that plays a role in feeling pleasure and regulating drive. The inherited activity of these genes may cause us to seek physical activity or to choose a more sedentary lifestyle. This preliminary report suggests that the motivation and desire to exercise is hard-wired. You may actually have your parents to blame for being a couch potato.”

If you’re the type of person who receives little mood boosts from exercise, the researchers recommend two strategies to get over the hump. The first is to find an activity you really love, and the second is to perform it with other people to promote social interactions during your workout.

Dishman concluded, “When people start viewing exercise as a duty or obligation, then that’s not a formula for sustained activity. That just puts people in a constant state of dissatisfaction.”