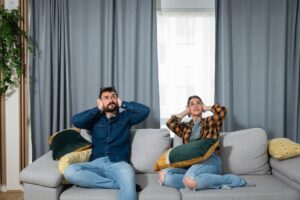 A recent study has found a link between loud noise and an increased risk of stroke in adults aged 45 and over. The research published in the journal Noise & Health found that people who are regularly exposed to loud sounds are at a higher risk of having a stroke, even if they don’t have any other risk factors. If you’re over 45, it’s important to be aware of the risks associated with loud noises and take steps to protect yourself from them.

For the study, administrative health data on a cohort of nearly 1.1 million people living in Montreal, Canada, were cross-referenced with noise measurements recorded by approximately 200 sound level meters across the island during the same period. The testing period was held from 2000 to 2014.

Researchers believe that people living in the vicinity of the major roads in the city are at higher risk of stroke due to the highest ambient noise levels in these areas. It was concluded that for every 10-decibel (dBA) increase in outdoor noise, the risk of stroke rises by 6% for people aged 45 and over living in Montreal.

Studies have shown that noise above 40 dBA at night and 55 dBA during the day can cause symptoms such as stress, fatigue, mood and sleep disorders and cardiovascular problems. Daily exposure to noise between 85 and 105 dBA poses a long-term risk of hearing loss; at 105 dBA and above, there is an immediate risk of tinnitus or even deafness.

To help combat the effect of noise, lifestyle changes may be essential, including making sure you’re getting the correct vitamins and nutrients. Noise and stress can take a toll on the brain, affecting concentration, memory, and overall cognitive function.

The Smart Pill can help counteract these effects through nine ingredients that help support, nourish, and maximize brain health and cognitive function. These include ginkgo biloba, huperzine A, bacopa extract, rosemary extract, and a B vitamin complex. This unique formula helps boost circulation, fight free radicals, and helps to promote clear thinking.