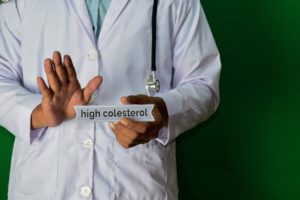 A new study released, called the most comprehensive and longest analysis of its kind, has found a strong link between non-HDL cholesterol levels and long-term cardiovascular events such as heart disease and stroke. The research published in the The Lancet extends existing information because it suggests that increasing levels of non-HDL cholesterol may predict long-term cardiovascular risk by the age of 75 years. Past studies have only included data up to 10 years.

The study used individual-level data from approximately 400,000 people to show that high cholesterol levels can create a long-term risk for cardiovascular disease in people under 45 years old, not just at older ages.

Breaking down the numbers, the study showed that women with non-HDL cholesterol levels and at least two additional cardiovascular risk factors that were younger than 45 had a 16 in 100 chance of having a cardiovascular event by the age of 75. For women aged 60 or over with the same characteristics, the estimated risk was 12%.

“This increased risk in younger people could be due to the longer exposure to harmful lipids in the blood. The risk may also appear larger compared to older ages because people aged 60 years and older in our study had not developed cardiovascular disease up to this age, so they may be healthier than others of their age who were excluded from the study because they had had cardiovascular disease,” says Professor Barbara Thorand, German Research Center for Environmental Health, Germany.

For the study, researchers used data from almost 400,000 people from 38 studies from Europe, Australia, and North America. The participants had no cardiovascular disease at the start of the study and were followed for up to 43.5 years. Over the period of the study, they were monitored for the occurrence of a fatal or non-fatal coronary heart disease event or ischemic stroke.

Looking at the data for all age groups and both sexes, researchers found that the risk for a cardiovascular event decreased continuously with decreasing non-HDL levels. The risk was the lowest for those individuals with the lowest non-HDL cholesterol levels.

“Our estimates suggest that halving non-HDL cholesterol levels may be associated with reduced risk of cardiovascular events by the age of 75 years, and that this reduction in risk is larger the sooner cholesterol levels are reduced. The risk scores currently used in the clinic to decide whether a person should have lipid-lowering treatment only assess the risk of cardiovascular disease over 10 years, and so may underestimate lifetime risk, particularly in young people,” says Professor Stefan Blankenberg, German Center for Cardiovascular Research, Germany.

“In lieu of needed clinical trial results investigating the benefits of long-term lipid-lowering therapy in people younger than 45, this study may provide helpful insights on the benefits of lipid-lowering therapy as primary prevention from an earlier age. However, future research is needed to understand whether intervention in young people with a high lifetime risk, but low 10-year risk, would have more benefits than later intervention,” he concludes.

The authors of the study hope that intervening early and intensively to reduce non-HDL cholesterol and LDL cholesterol levels during the lifespan could potentially reduce early signs of atherosclerosis, or hardening of the arteries. More research still needs to be done to find which levels should be used to make treatment recommendations, particularly in young people.