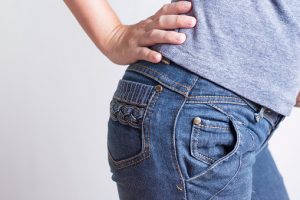 Sciatica is a pain that radiates down the back, though the buttocks, and into the leg. The most common question people ask is: how long is this going to last? We want to know how long each attack will last and how long between flare-ups, but the answer may be more complicated than just simply giving a definite length of time. There are unfortunate individuals who have pain that doesn’t go away, often leaving them with suffering from chronic and persistent pain.

Sciatica is a pain in the lower back or hip that radiates down into the buttocks and into the back of the leg along the sciatic nerve, with the pain often terminating in the foot. It is often the result of a pinched or inflamed sciatic nerve, which can occur after an injury, muscular strain, or herniated vertebral disc. Sciatic pain typically goes away on its own within a few weeks.

This type of pain can be difficult to describe, as it can take a number of different forms. It may feel like more of a cramping or numbing pain sensation that worsens when you sit, sneeze, or cough. It may be described as numbness combined with an electrical or burning sensation running down the leg, or even just as “pins and needles” along the leg. Pain associated with sciatica can be accompanied with muscle weakness, and it sometimes results in loss of bowel and bladder control, which would require emergency care treatment.

Current statistics show that 80 to 90 percent of all patients recover within six weeks without surgery.


How long does sciatica last?

Acute attacks are by far the most common complaint in those with sciatic pain, with symptoms coming and going. The frequency of flare-ups can vary from patient to patient, with some having more episodes and others only having them on occasion. The following are some of the facts associated with acute episodes of sciatica:

As the name suggests, chronic symptoms exist over longer periods of time or virtually all the time. This category of sciatic pain is often described as a pain that never really goes away. The severity of the symptoms, however, is often not as intense as it was when they first developed sciatica. Over time, their tolerance for pain has increased, allowing them to endure it for lengthy periods of time. The following are some facts associated with chronic episodes of sciatica:

While there are cases of individuals who make full recovery from sciatic pain, the harsh truth of the matter is that the majority of patients will have some degree of pain for the rest of their lives. Sciatica does not respond well to most forms of treatment, with no accurate explanation for its cause.

While most people fully recover from sciatic pain, it can still potentially cause some serious complications, such as:

Experiencing sciatic type symptoms should prompt you to go see your doctor right away, as it can drastically reduce the length of time you suffer from the condition. Your doctor may also help you determine if you are at risk for any further complication and provide treatment that is best for you. While mild sciatic pain can go away in time, it’s a good rule of thumb to call your doctor if you are finding your pain to be particularly unbearable.