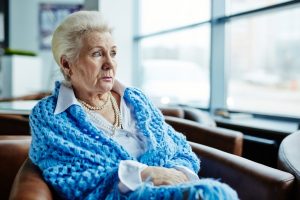 Lead researcher Dr. Nancy Donovan explained, “For people who have high levels of amyloid — the people truly at high risk for Alzheimer’s — they were 7.5 times more likely to be lonely than non-lonely.”

Dr. Donovan added, “People who are starting to accumulate amyloid may not be as well-functioning in terms of perceiving, understanding, or responding to social stimuli or interactions. This could be an early social signal of cognitive [mental] change.”
If the results are confirmed, then paying closer attention to a person’s emotional health may be an early diagnostic practice for Alzheimer’s disease.

For their study, the researchers examined 43 women and 36 men with no signs of Alzheimer’s disease.

The researchers found that high levels of amyloid proteins in the cortex were associated with a 7.5 times higher risk of feeling lonely, even when their social engagement was taken into account. This reveals that even in social settings, seniors may feel lonely as a result of higher amyloid levels.

The study was conducted on a small group, so larger studies need to be conducted to confirm these findings.

Behavioral changes are well known as an early sign of Alzheimer’s disease, and the feeling of loneliness and social withdrawal could be part of that.