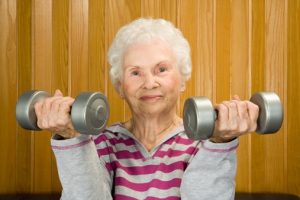 Living into your 90s doesn’t mean being stricken with disease and disability, according to new findings. The study revealed that, with good genes, you may live way past the age of 90 in good health. Dr. Sofiya Milman, assistant professor of medicine and one of the authors of the study, said, “Chronic disease is not an inevitable part of aging. An extended period of good health can accompany a long life span and is an achievable goal.”

Disability and disease are often tied to aging, but there are cases of people living long and healthy lives.

The researchers used data from two previous studies analyzing whether people experienced similar delays in the onset of disease and disability before death.
One study included Ashkenazi Jews who were still living independent lives at the age of 95. These people were compared to younger Ashkenazi Jews with no history of longevity. The other study included 100-year-olds living in Boston area, as well as England, Ireland, Australia, and New Zealand – also comparing these subjects to those with no history of longevity.

Comparison has shown that the longer-living people did experience disease and disability in later-life, but for shorter periods prior to death than the younger people.

Dr. Anne Newman, director of the Center for Aging and Population Health, said, “A lot of concern is that, well, if you live a long time, you’re just going to be bedridden. And what they’re showing is that’s not true. The people who are living longer are living healthier. Their health span was longer, and that’s the important piece of it.”

Genetics were found to be the largest factor to older, healthier lives, and the researchers identified several genetic factors that could slow down the aging process.

Milman concluded, “Our centenarians were not practicing particularly healthy behaviors: 60 percent of men and 30 percent of women were smokers, less than half exercised regularly, and approximately 50 percent were overweight or obese.”