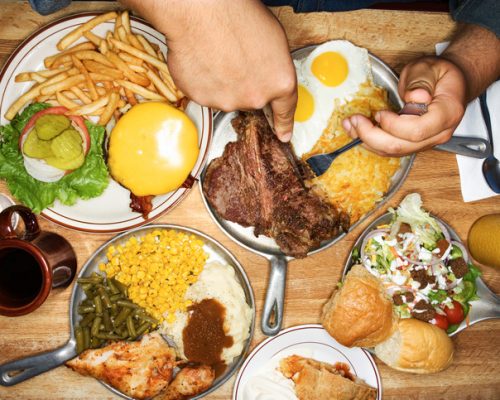 When we think of our liver health, the first thing that comes to mind is probably the impact of alcohol. But did you know that even if booze is off your menu, your liver is still at risk for disease?

You see, the number of cases of non-alcoholic fatty liver disease (NAFLD) is growing as a result of another increasingly common problem in America that is obesity. NAFLD is not caused by alcohol consumption, but rather the intake of fat, which accumulates in and around the liver. The result? The food that we eat is making our livers sick.

Though, to be completely fair, it’s not just about what we eat – but also about how much we eat.

In America, we have a portion control problem. Everything we eat is supersized and it seems that when we do get served a recommended amount it just isn’t enough. Buffets and all-you-can-eats are flourishing. Eating too much has become a pressing issue, there’s no doubt in that.

The researchers found a link between two molecules – one that stores fat and the other that promotes fat-burning energy. These molecules complement each other in order to maintain a healthy level of fat in the liver. When these molecules are removed from the liver, toxic fat builds up, leading to the development of an aggressive and lethal form of non-alcoholic steatohepatitis (NASH) in mice.

The findings are important because they shed light on possible new ways of treating liver disease as a result of overeating.

After we eat a meal, the fat is absorbed by the liver and is either stored in the form of triglycerides or burned off for energy. The decision to burn fat relies on numerous factors, but the study found that the enzyme histone deacetylase 3 (HDAC3) and the protein SREBP are two critical regulators in this case.

Lead researcher Mitchell Lazar explained, “Based on what we first knew about these two molecules, we were expecting a tug of war that would fall somewhere in-between if we took them both away, either too little fat or too much in the liver. Instead, it led to an accumulation of toxic fat and a complete energy drain on the mice that caused inflammation, liver damage, and ultimately death.”

“It’s really two molecular pillars holding up a central ‘building’ to prevent liver toxicity. This work shows that on a normal fat diet these two molecules hold down the fort in the mice,” Lazar added.

Lazar concluded, “These findings could serve as a model, in a short and acute way, of toxicity of fat in the liver that we can use to look for drugs that target these molecules to reverse or stop the damage.”

Until treatments can be developed based on the research findings, it’s a wise decision to moderate your food consumption and avoid overeating in order to reduce the amount of fat reaching your liver and leading to disease.