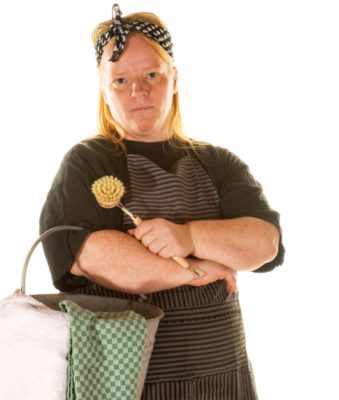 If your husband offers to help with the housework, you may want to think twice before you take him up on the offer.  A lack of physical activity is a known contributing factor to weight gain and obesity.

The decrease in the amount of housework being performed by women in recent years compared to decades ago may be contributing to the rising levels of obesity that are being seen in today’s society, according to a recent study published in PLosOne.

While doing less housework may seem like a wonderful idea, it may have a devastating effect on your waistline according to this research.

Housework Decreases – What This Means for Weight Gain in Women

Disturbingly, women were found to be spending their extra time plopped in front of the television.  The researchers found that in 1965, women typically spent about 8 hours per week watching television programs.  In 2010, the number of hours spent watching television increased to 16.5 a week. This type of inactivity can lead to weight gain and obesity.

What This Means for Weight Gain, Obesity and Energy Expenditure

The increasing accessibility of dishwashers and other small appliances that make every day household tasks a little easier and less time consuming has led to a significant decrease in the amount of physical activity and energy expenditure required to perform house work.  Instead of using the free time gained from advances in technology to watch television, women should be engaging in other forms of physical activity to make up for the lack of calories that they would be burning doing household chores.  This will help to prevent weight gain and help to prevent the development of obesity.

While some women may get defensive about this research, the researchers do stress that they are not saying the women (or men) should do more housework; but rather that individuals should think about how much energy they expend in a day.  In order to prevent the levels of obesity from climbing even higher, attention needs to be focused on calories intake versus calories output.  Once people understand the effect that calories play on weight gain and obesity, they will have a better understanding on how to monitor and change their diet if necessary.