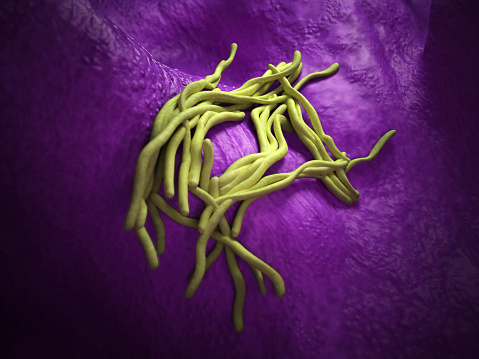 Legionnaires’ disease is straddling the breadth of this country with its appearances in New York City, specifically the Bronx, 1000 km west in Quincy, Illinois, and even a further 2000 km west in the San Quentin prison in Northern California.

Legionnaires’ disease is caused by a water-borne bacterium and is mostly contracted through inhaling bacteria that thrives in warm water. People can get sick if they inhale mist or vapor from contaminated water systems. The common symptoms of the disease are muscle aches, breathing difficulties, coughing, and fever.

The current outbreak was first identified in Illinois late last week after an initial case was reported at a veterans’ home in early August. The authorities have not yet been able to determine the source of the infection. The health officials in Illinois report that since the disease raised its ugly head in the 129-year-old home for veterans in Quincy, where 50 residents were infected, seven people have died because of the outbreak.

Residents of the veterans’ home are currently using only bottled water and sponge baths as a precaution. The home has cleaned out its hot water tanks and air conditioning system. It has also shut down decorative fountains, drinking water fountains and any other sources where water could be aerosolized.

Another death and four new cases of the disease have been reported this week in Quincy, but the new cases are not connected to the infection in the veterans’ home.

According to Adams County Health Department director Jerrod Welch, all seven deaths were elderly people who had previous medical conditions that increased their risk of exposure to the disease and complications thereof.

As the disease has a two week incubation period, Welch is not ruling out further deaths.

Legionnaires’ experts at the U.S. Centers for Disease Control and Prevention (CDC) were more worried about the number of patients rather than the outbreak prevalence. A CDC team trained in epidemiology is stationed at the veterans’ home to assist the state investigation. As the spread of infection is more often through the water systems and not through people, residents are free to leave the home. However, the elderly and sick, or people with a compromised immune system, are advised not to visit the home.

Similar outbreaks have been reported in California and New York.

In New York, 12 people died and more than 100 people were infected. The NY outbreak was traced back to bacteria found in a cooling tower on the roof of a Bronx hotel.

And in the far west, the rapid spread of the disease in the San Quentin Prison is sending the California Department of Corrections and Rehabilitation scrambling to find the source of the bacteria in the prison’s outdated plumbing system. They are also working hard to identify and treat the scores of potentially infected inmates. As a precautionary measure, more than 100 portable showers have been installed in the prison, the kitchen has been decommissioned, and boxed meals are being shipped in. Movement of the inmates has been restricted – they were not able to attend their various work and education assignments, and movement was limited to recreational activities in day rooms and to and from the dining halls. The inmates have also not been permitted into the prison yard.

Legionnaires’ disease is a highly preventable disease. But prevention requires meticulous cleaning and disinfection. Maintenance of water systems is the key to preventing the disease. These include drinking water systems, hot tubs, decorative fountains and cooling towers. Persons at increased risk of infection may choose to avoid high-risk exposures, such as being in or near a hot tub. Another way to limit the spread of infection is to avoid smoking. If you are exposed to the bacteria, smoking increases the risk of contracting Legionnaires’ disease. As yet, there is no preventive vaccine against the disease.

Nationwide, Legionnaires’ disease is on the rise, according to the CDC, but it is unclear whether that is because it is being reported more frequently or whether there has been an actual uptick in cases.