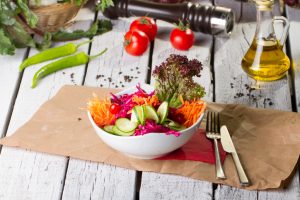 LDL “bad” cholesterol can be lowered with a Mediterranean diet and a low-carb vegan diet in men. The study looked at 19 men with metabolic syndrome, which means having three or more risk factors for heart disease and stroke – for example, being overweight, having high blood pressure, and being diabetic.

Adhering to the Mediterranean diet resulted in a nine percent reduction of LDL cholesterol, along with decreased blood concentration of the protein part of the lipoprotein.

Lead author of the study Caroline Richard said, “The Mediterranean-style diet, or MedDiet, may be recommended for effective management of the metabolic syndrome and its related risk of cardiovascular disease.”

In an alternative study, researchers found that men who follow a low-carb vegan diet have a reduced risk of heart disease and experience greater weight loss. The diet, known as Eco-Atkins, is based on low-carbohydrate vegan style of eating.

Lead author Dr. David Jenkins said, “We killed two birds with one stone – or, rather, with one diet. We designed a diet that combined both vegan and low-carb elements to get the weight loss and cholesterol-lowering benefits of both.”

“We could expect similar results in the real world because study participants selected their own diets and were able to adjust to their needs and preferences,” Dr. Jenkins continued.

Instead of planned meals, the participants were given menu guides that included lists of appropriate foods they could eat. The study included 23 obese men and women who followed the Eco-Atkins diet for six months. The participants were encouraged to only eat 60 percent of their estimated caloric requirements.

Sources of carbohydrates included high-fiber foods like oats and bran and low-starch vegetables like okra and eggplant. Sources of protein came from soy, vegetables, nuts, and cereals.

At the end of the study, the participants had a reduced risk of heart disease and experienced substantial weight loss.