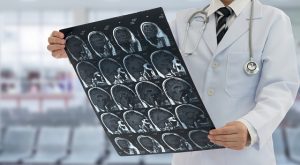 Lacunar infarct is a type of stroke that occurs when one of the arteries supplying blood to the brain gets blocked. These arteries are quite small, which makes them vulnerable to damage. While most arteries in the body gradually become smaller, the arteries of the lacunar stroke branch off a large high-pressure artery.

Lacunar stroke is a type of ischemic stroke that occurs within the deepest structures of the brain. Experiencing a lacunar stroke increases your risk of future strokes. In order to reduce damage and future complications, it’s important that lacunar stroke is detected right away so treatment can begin early on.

According to the National Institutes of Health, lacunar stroke accounts for one-fifth of all strokes. When a stroke occurs, the brain is deprived of oxygen, causing brain cells to die within minutes.

The incidence of lacunar stroke increases with age, and it tends to affect more men than women. Several studies have also found higher frequencies of lacunar strokes in dark-skinned people, Mexican-Americans, and Chinese people from Hong Kong.

Because lacunar strokes can affect the deep structures of the brain, the damaging effects sustained may present in several different ways.

The most common type of lacunar stroke, it accounts for more than 50 percent of all cases. It often presents as weakness in all or some aspects of voluntary movements, such as walking or simple body movements. This happens because the stroke has damaged or destroyed brains cells in that region of the brain used for sending signals for muscle control. It usually occurs on one side of the body, and often presents as a combination of arm and leg weakness, sparing the face; or a combination of arm, leg, and facial weakness.

This type of stroke involves losing sensory aspects of the body, presenting as numbness or an unusual perception of pain, temperature, or pressure. A pure sensory stroke occurs as a result of damaged or destroyed regions of the brain that are responsible for controlling these sensations, typically the thalamus.

It affects sensory functions like touch, pain, temperature, vision, hearing, and taste. These are typically isolated to the side of the body controlled by the stroke-inflicted cerebral hemisphere.

It includes aspects of both pure sensory and pure motor strokes. They occur much in the same way as the previously mentioned types of stroke but affect regions of the brain that control both motor and sensory innervation.

This type of stroke occurs due to a blockage of blood flow to one of the following areas: the internal capsule, corona radiata, or the pons. A stroke in these areas can cause imbalances in walking (ataxia) and weakness in the arm or leg on the affected side of the body.

This condition results in trouble speaking and a clumsy hand as a result of a stroke that affects the anterior portion of the internal capsule. Individuals have difficulty pronouncing or forming words due to inadequate movements of the muscles in their voice box or larynx, as well as their tongue and other muscles of the mouth. They also have difficulty with writing, tying a shoelace, or playing the piano.

Like other types of strokes, a lacunar stroke is the result of insufficient blood flow to the brain through the lacunar arteries. The biggest risk factor for lacunar stroke is high blood pressure, along with older age, high cholesterol (and other conditions narrowing the arteries), smoking, excessive alcohol consumption, drug abuse, pregnancy, use of birth control pills, sedentary lifestyle, poor diet, and obstructive sleep apnea.

Studies have indicated that almost all cases of lacunar stroke had hypertension as being the main precipitating factor for its development. Having high blood pressure for long periods of time can lead to the development of microatheroma and lipohyalinosis.

Diabetes is highly prevalent in the Western world and a well-recognized risk factor for the development of small-vessel diseases throughout the body. So, the risk of stroke is exceptionally high for those who have diabetes.

Embolism, which is a condition where blood clots travel from elsewhere in the body, is not uncommon when having a co-existing cardiogenetic abnormality that causes abnormal blood clot formation. These may include atrial fibrillation and ipsilateral carotid stenosis.

It’s important to recognize the symptoms of lacunar stroke so that you can receive medical attention right away. Symptoms of a lacunar stroke are similar to those accompanying other stroke types, namely, slurred speech, inability to raise arms, one side of the face appearing droopy, numbness on one side of the body, difficulty walking or moving arms, confusion, memory problems, struggling to speak or understand language, headache, and loss of consciousness.

In the majority of humans, the left hemisphere is dominant and has additional responsibilities including the processing of speech and behavior. Lesions on this side of the brain may also lead to the development of speech problems, changes in personality, or even dementia.

Additional symptoms of a lacunar infarct include:

When symptoms of a lacunar stroke are present, your doctor will immediately call for a CT scan or MRI scan in order to get a detailed image of the brain. A Doppler ultrasound may also be used to measure blood flowing through veins and arteries.

Your doctor may also run tests to measure your heart function. Kidney and various blood tests may be requested as well.

The main decider of lacunar stroke prognosis is the speed at which treatment is initiated. Because the brain is being starved of oxygen-rich blood, the more time that is taken to help relieve this blockage, more brain cells will die. This is why speedy recognition of stroke symptoms is crucial to initiate the travel to the nearest hospital setting. Early treatment within three hours reduces brain damage.

When arriving at the hospital, supportive measures will take place. This often includes assisting respiratory and heart functioning. The patient will also be giving clot-dissolving medication (tissue plasminogen activator) either by mouth or by IV. Depending on the severity of the lacunar infarct and if the current hospital facilities allow it, the patient may be given this anticoagulant medication directly at the side of the blockage in the brain.

Aspirin is also given within 48 hours to reduce the chance for additional clotting.

Once the worst has past and the lacunar stroke patient is in the recovery phase, a physiotherapy program is typically discussed to help improve any ability that was lost or compromised.

Physical therapy can include relearning speech, language, and motor skills. It usually takes a lot of time and effort, with the patience of the patient being tested, as it may take months or years to regain lost skills.

Lacunar strokes account for about a quarter of all ischemic strokes and are commonly regarded as being benign vascular lesions with a favorable long-term prognosis. However, this is only considered true in the early stages of the disease, as a few years after the infarct has occurred, the risk of death due to mainly cardiovascular causes can increase.

Age, vascular risk factors, high nocturnal blood pressure, and severity of cerebral small-vessel disease are all significant factors that can affect prognosis upon on the presentation of a lacunar stroke. The risk of suffering from another stroke, after a lacunar stroke has occurred, is similar to most other types of stroke with patients having an increased risk of developing cognitive decline and dementia.

Stroke survivors may have problems with short-term memory, difficulty with thinking and reasoning, or even have difficulty controlling their emotions.
The incidence of stroke is higher in men, but women represent more than half of all stroke deaths across all age groups, according to the American Stroke Association.

Experiencing a stroke can be a scary situation and one that may be limited to what can be done to treat it if not medical attention is not promptly received. If you or anyone you know happens to suddenly experience stroke-like symptoms, seek medical attention immediately. Vigilance and the confidence that your doctor will do everything in their power to help you regain any sense of normalcy will bring you solace in a dire situation such as this.