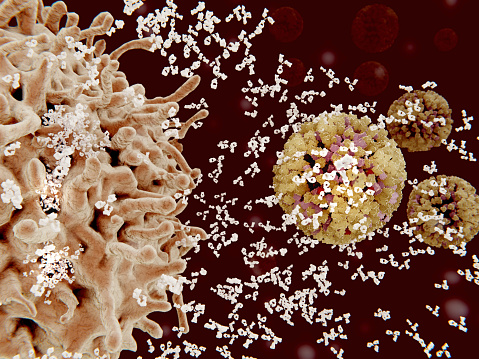 The human body is a marvel of biological engineering, capable of defending itself and adapting to its environment. For example, people living in colder climates will generally have a slightly thicker layer of fat underneath the skin compared to those living in warmer ones. The body can also fight off harmful bacteria and viruses that threaten our health and survival with the help of its immune system.

How the body protects itself

Normally, when infected by a foreign invader like a harmful bacteria, your body will go on high alert and send out immune cells in an attempt to destroy the organism. Your body does this by producing antibodies that come from B cells. When these particular cells recognize a pathogen, it can proliferate, developing into plasma cells that secrete large amounts of antibodies that bind to the pathogen and fend off infection.

Researchers hope to recreate this process in a laboratory setting. They want to produce specific antibodies that could help those who have dysfunctional immune systems and are otherwise incapable of mounting a similar defense against foreign pathogens.

The team, led by Facundo Batista from the Francis Crick Institute in London and the Ragon Institute of MGH, MIT, and Harvard, found it initially difficult to replicate this process and B cell differentiation.

However, the team eventually achieved their goal, creating specific human antibodies in a lab by treating patient-derived B cells with tiny nanoparticles that provided the signals required to make antibody production a possibility.


Replicating the process of making antibodies

This new laboratory method was successfully demonstrated using various bacterial and viral antigens (a substance that immune cells use to begin the production of antibodies). The antibodies produced were able to neutralize harmful pathogens just as if they were to occur in the human body.

The researchers were even able to generate anti-HIV antibodies from B cells isolated from HIV-free patients. This demonstrates that the doctors do not have to have been previously exposed to a certain antigen through vaccination or infection to be able to produce certain antibodies.

“Specifically, it should allow the production of these antibodies within a shorter time frame in vitro and without the need for vaccination or blood/serum donation from recently infected or vaccinated individuals. In addition, our method offers the potential to accelerate the development of new vaccines by allowing the efficient evaluation of candidate target antigens,” said Batista.