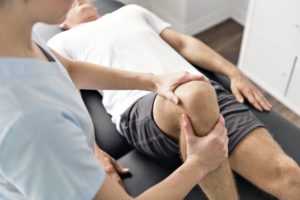 A knee injury in young adults could put them more at risk for developing arthritis in middle age, according to a recent study. For those who have had broken bones or torn connective tissue, this risk increases.

For two decades, researchers followed almost 150,000 adults aged 25 to 34, including about 5,200 who had a history of knee injuries. It was found that compared to people who never had knee injuries, those who did had nearly six times the number of incidences of osteoarthritis during the first 11 years of follow-up. The risk then tripled over the next eight years.

“Injuries that occur inside the knee joint, for example, in the meniscus or cruciate ligament, may alter the biomechanical loading patterns in the knee,” said study leader Barbara Snoeker, of Lund University in Sweden.

“Such injuries may lead to an ‘imbalance’ in force transmissions inside the knee joint, consequently overloading the joint cartilage and leading to increased risk of developing osteoarthritis, compared to injuries that mainly affect the outside of the knee joint, such as contusions.”

Knee injuries most often involved multiple structures of the knee, which accounted for 21% of participant injuries. The second most common type of injury was cuts and contusions, at 18%, followed by cartilage or other tissue tears at 17%.

Osteoarthritis commonly affects the large weight-bearing joints and can eventually lead to the need for total joint replacement. Some risk factors can include a history of knee injuries, being overweight, older, female, or having a job that puts stress on the joints.

What happens after a knee injury can greatly influence the risk of arthritis later in life. Rehab matters regardless of what other treatments patients receive said Adam Culvenor, a sports and exercise medicine researcher at La Trobe University in Bundoora, Australia, who wasn’t involved in the study.

“Once these injuries occur, optimally managing them with an intense and progressive period of rehabilitation under the guidance of a physical therapist (irrespective of the decision to have surgery or not) to strengthen the muscles around the knee to facilitate a return to function and physical activity is likely to reduce the risk of osteoarthritis and persistent symptoms longer-term.”