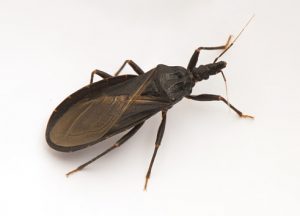 The triatomine bug – known as the kissing bug – is spreading a deadly infection of Chagas disease across America. Damage caused by the Chagas disease can affect the heart, and health officials say it has already spread across more than half of the U.S. states.

The name “kissing bug” was given to the triatomine because of the way the insect bites, usually around the mouth and face while the person is sleeping. Documents of Chagas date back to the 1850s. Many people think the triatomine has physical traits that resemble a cockroach.

Although a bite from a triatomine does not cause infection, it leaves behind feces that carry parasites that cause the Chagas disease. Symptoms of a Chagas infection include flu-like symptoms, vomiting, muscle pain, difficulty breathing and, if untreated, death.

There are currently 300,000 cases of infection from the kissing bug in 28 states. The belief is that people first became infected in Latin America, which has over eight million documented cases.

The bug is nocturnal and is found outdoors but can hide beneath beds and mattresses. It can also affect dogs and is not transferred human-to-human.