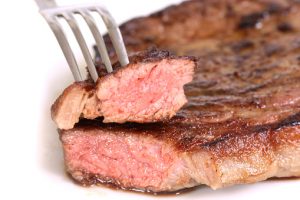 A new study has found that kidney damage can result from eating high amounts of red meat. The Singapore study suggests, swapping at least one portion of red meat for another type of protein can drastically lower the risk of kidney failure.

One of the study authors Dr. Woon-Puay Koh said, “Our findings suggest that patients with chronic kidney disease or the general population worried about their kidney health can still maintain protein intake but consider switching to plant-based sources. However, if they still choose to eat meat, fish/shellfish and poultry are better alternatives to red meat.”

“It adds useful and additional information to our knowledge base, but I’m not sure if it necessarily tips the scale one way or another. My opinion is that it’s still perfectly fine for individuals who are otherwise healthy to consume red meat in moderation,” added Dr. Allon Friedman, a nephrologist and associate professor of medicine at Indiana University School of Medicine in Indianapolis, IN.
Previous studies have shown the benefits of a low-protein diet in people at risk for kidney failure, but this is the first study to reveal that high consumption of red meat could contribute to kidney failure.

Red meat has been studied for years and has been shown to have a negative impact on health. Last year, the World Health Organization warned of a possible link between red meat consumption and cancer. Furthermore, it has been suggested that cooking red meat at higher temperatures could increase kidney cancer risk.

What’s important to note is that the findings may not be so easily translated to North America, as meat production and consumption practices, along with genetics and ethnic background vary greatly between Asians and Americans. But it does bring to light the potential risks of excessive red meat consumption.

The study was published in the Journal of the American Society of Nephrology.