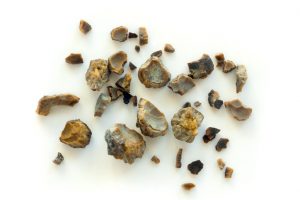 Patients with ankylosing spondylitis were found to have altered calcium and vitamin D metabolism, along with higher rates of inflammatory bowel disease (which can increase their absorption of calcium and oxalate). Another factor that can increase the risk of kidney stones in ankylosing spondylitis is the use of anti-inflammatory medications and immobilization.

The researchers identified 3,334 patients with ankylosing spondylitis who were matched with 13,336 controls.

Some people require surgery to remove kidney stones, but many can address the pain without an invasive operation. Before we take a look at how to get rid of kidney stones naturally without surgery, let’s first discuss some preventative measures to avoid kidney stone formation.

As mentioned above, we all have the potential for developing kidney stones. However, there are some steps that can decrease your risk. Take a look at the prevention tips below to see how you can lessen your chances of getting kidney stones.