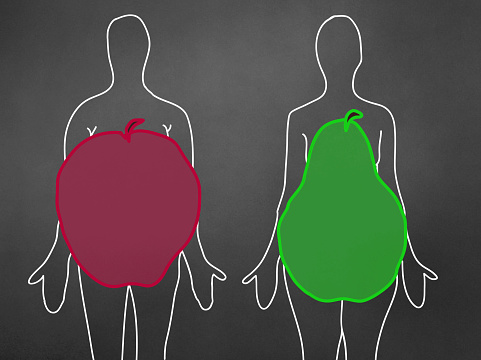 In an apple-shaped body type, the fat is situated around the abdomen, while in a pear-shaped body, the hips are larger than the shoulders.

To conduct their study, researchers looked at kidney health and hip-to-waist ratios, which reveal where fat is situated, in 315 individuals with an average body mass index of 24.9 kg/m2, which is still considered normal.

Lead researcher Arjan Kwakernaak said, “We found that apple-shaped persons—even if totally healthy and with a normal blood pressure—have an elevated blood pressure in their kidneys. When they are also overweight or obese, this is even worse.”

The findings suggest that blood pressure in the kidneys of individuals with apple-shaped bodies may be responsible for increasing the risk of kidney problems later in life. Previous research has found that limiting salt or taking blood pressure medication can be beneficial in lowering blood pressure thus protecting the kidneys in the long run. Our current data suggest that such interventions could be particularly useful in subjects with a central body fat distribution,” concluded Kwakernaak.

An apple-shaped body type doesn’t only increase your risk of later-life kidney disease. It has also been associated with many other health risks, which include metabolic syndrome, type 2 diabetes, cardiovascular problems including heart disease and high blood pressure, higher levels of stress, increased inflammation, and certain cancers, as well as an increased risk of sleep apnea, pulmonary hypertension, and cardiac arrhythmia.

In order to determine whether you belong to an apple-shaped body type, grab a measuring tape and measure your waist one inch above the navel, then measure around your hips at the widest part, and divide the waist number by the hip number. If the result is over 0.8 this indicates an apple-shaped body.

As you can see, it can be a risky business living as an apple-shaped individual, and so it’s important that you take steps to be healthier and rid yourself of the fat that is sitting around your abdomen. Luckily, diet can easily help you begin your journey to a healthier shape.

Some diet tips for an apple-shaped individual include consuming more complex carbohydrates, which are foods high in fiber like wild or brown rice, quinoa, and oats. You should also consume quality proteins moderately, such as lean chicken or lamb, and only consume healthy fats found in olive oil or avocados. You should also avoid refined carbohydrates like processed foods and white bread. Above all else, avoid sweets such as ice cream or foods containing fructose, corn syrup, or any other artificial sweetener, as it will go straight to the abdomen and stay there.

Overall, your diet should consist of 50 percent complex carbohydrates, 30 percent high quality protein, 20 percent healthy fat, and some extra supplements including omega-3, psyllium (which is a soluble fiber), and a multivitamin.

Pairing healthier eating along with regular exercise can help rid you of the health complications, which are associated with the apple-shaped body type.

Women with an apple-shaped body are at higher risk for binge-eating, according to a new study. The findings come from Drexel University, where they found apple-shaped women – with more fat stored around their trunk and abdomen – experience a “loss of control” and partake in binge-eating episodes. Continue reading…

Type 2 diabetes risk may be predicted by a women’s body type by examining her hip circumference, according to new findings. There are many different body types: banana (straight from shoulders down), apple (wider top half, thinner lower half), pear (wider hips, thinner top), and hourglass (thin at the waist, rounded bust and hips). Even though we may have our own preferences, body shape goes further than visual appeal. Continue reading…