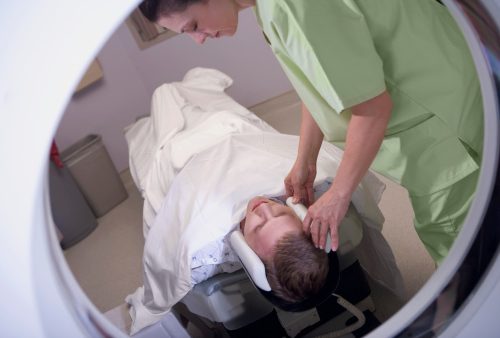 The world’s first MRI study of the effect of kidney disease on heart function shows that the necessary dialysis treatments for those with kidney failure can cause heart damage.

Recent research conducted by the University of Nottingham used magnetic resonance imaging to study the stress placed on patients’ hearts while they underwent kidney dialysis. The study compared the effects of two different types of dialysis on the heart—hemodialysis and hemodiafiltration.

Hemodialysis is the process of continuously removing blood from the kidney patient through one needle and sending it through a filter called a dialyzer—which cleans the blood—before returning it to the patient’s body through a separate needle. In comparison, hemodiafiltration combines hemofiltration—a process similar to dialysis that removes smaller molecules from the blood and replaces them with a sterile fluid—and hemodialysis.

To conduct the study, researchers performed MRI scans on 12 patients who underwent both hemodialysis and hemodiafiltration in random succession. It found that there were significant effects on the cardiovascular system with both methods of dialysis, but that neither was better or worse than the other in terms of their impact on the heart.

Performing the study came with challenges for the research team, as they had to modify the equipment in order for the MRI machine to function properly. The standard metal needles used in dialysis had to be changed to a non-magnetic silicone substitute, and the lines from the dialysis machine needed to be extended and insulated for patient safety. This setup allowed for researchers to monitor various cardiovascular measurements while the patients were undergoing dialysis treatments and to make observations based on the activity.

They noted the amount of blood pumped per minute by the left ventricle, as well as how efficiently the muscle could contract, as well as blood flow into the coronary artery, and found that cardiac function suffered while the patient underwent both forms of dialysis, with some recovery after the treatment.

Professor of Nephrology at the University of Nottingham, Maarten Taal, summarized their findings, noting that “All patients showed some degree of left ventricular dysfunction and blood flow to the small capillaries in the heart muscle decreased significantly during both types of treatment.” While the sample size tested was small, 100% of patients’ cardiac function was negatively impacted by the dialysis treatments, raising concern.
Dialysis is a necessity for many with kidney disease and for those who are dealing with kidney failure, but this new study suggests that there are drawbacks to these blood cleansing systems. The connection between cardiac stress and dialysis must be addressed in order to ensure patients receive the best treatment possible, and to make sure that doctors are able to treat kidney disease without harming patient health. There is a need for more research in order to determine preventative and recovery methods to aid in cardiac health during dialysis.

Related: Prevalence of atrial fibrillation in dialysis patients is higher than previously thought