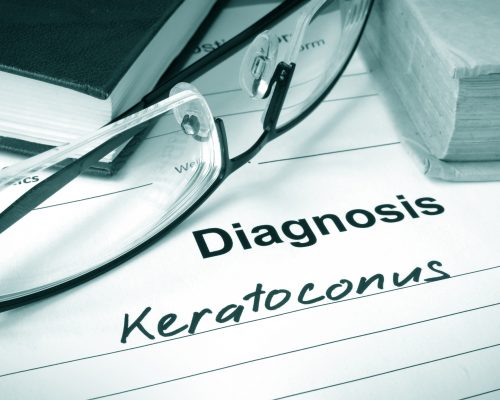 Keratoconus, corneal disease, treatment with corneal crosslinking shows promise. A new light-based technique that selectively stiffens tissue in the cornea may aid in treating keratoconus, which is caused by weakened corneal muscles.

A condition that causes vision distortion, keratoconus develops when the round cornea becomes thin and cone shaped. This abnormal change prevents the light from entering the eye, hindering the retina’s ability to focus and, thus, distorting the image.

In healthy individuals, light travels through the cornea past the lens to the retina, allowing the brain to create an image. The corneal surface is normally smooth, so light can pass through with ease. Because of structural changes of shape and surface in keratoconus, the passing light is projected as a distorted image.

First author of the study Sheldon J.J. Kwok said, “Because light has the ability to probe deep inside tissue, we’re using that property to both go inside and change mechanical properties of tissue and to measure those changes so that we can understand how the tissue changed and visualize it noninvasively.”

“Right now, ultraviolet light is used to perform crosslinking across the entire cornea. However, this comes with a risk of damaging the innermost layer of the cornea, a complication that changes the corneal function and can cause it to become very hazy. There is also no way to predict whether the procedure will actually improve vision in a given patient,” added Seok-Hyun Yun, the research team lead.

The researchers found that exposing tissue to 200-milliwatt laser light for 10 minutes induced collagen crosslinking without damaging tissue. Yun explained, “If you can crosslink a specific part of the cornea, it might be possible to optimize the visual outcome. With two-photon absorption we can selectively choose and limit the depth of crosslinking to avoid cell damage both on the top and bottom layers of the cornea.”

This comes with a challenge: How do you verify if the crosslinking did occur? The collagen crosslinking brought on by two-photon absorption is not easily visualized with standard imaging methods. The team used a specialized technique called Brillouin microscopy that they developed earlier.

“We used Brillouin microscopy to validate that we can induce crosslinking in tissue and showed that the amount of crosslinking produced with two-photon adsorption is almost the same as what can be induced with the single-photon approach used today,” said Yun.

Additional studies are needed to verify the usefulness of this treatment for keratoconus and develop a better understanding of crosslinking and its effect on the cornea.

Other treatment options for keratoconus

Early treatment requires the use of prescription glasses or rigid contact lenses. There is a specific procedure known as phototherapeutic keratectomy, which helps smooth out the scars and improve contact lens wear.

Another treatment involving collagen crosslinking is effective for preventing keratoconus progression. Implants called intacs are placed beneath the surface of the cornea to help reduce the cone shape and improve vision.

The last resort is cornea transplant, which replaces the patient’s cornea with a donor cornea that is stitched into place.

The type of treatment depends on the severity of keratoconus.