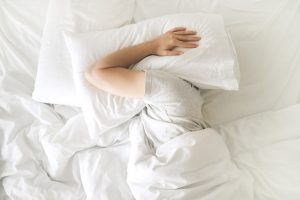 Surely you feel groggy after a night of poor sleep. But it’s possible the mental impacts don’t stop there.

A new study is suggesting that just one night of sleep loss, which means less than six hours, can impair daily function, and contribute to you losing control over emotions.

The issues persisted until participants had a good night’s sleep of more than six hours.

These results highlight just how important sleep factors into how we feel and function every day. Poor sleep may lead to greater irritability, stress, and anxiety, putting stress not only on yourself but on relationships.

Further, the study indicates that those relying on low levels of sleep during the week can’t really pay “sleep debt” or make it up on the weekend. The effects of poor sleep seem to go day by day, and even if a good night’s sleep on Saturday night has you feeling great on Sunday, it can be thrown off with a poor night’s sleep the next day.

Prioritizing sleep could be a way to improve how you feel every day from an emotional and physical standpoint, in the short term. Of course, there are longer-term effects of poor sleep, like an increased risk for heart disease, as well.

Try to optimize sleep by setting a consistent bed and wake time and not altering it for things like television shows, sports games, or other distractions. I’m sure there are special occasions that occur where sleep may be shortened, just make them few and far between.

You’ll likely feel much better for it!