Home » General Health » Jet lag may be a thing of the past: Study 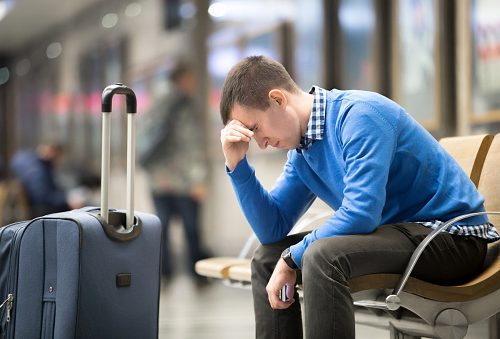 If there is one thing most people would like to do more of, it’s to travel and see the world. But one minor detail we neglect to think about is the effect of jet lag, that feeling of daytime fatigue that occurs when traveling across multiple time zones. However, new research may make jet lag a thing of the past, as researchers suggest that a group of cells in the retina may hold the key to remedying this annoying phenomenon.

Understanding how jet lag occurs will give some context to this new discovery. Our bodies have an internal biological clock that aligns with the day and night cycles in the area you live. This means that when the sun is visible, your body knows it’s time to wake up, and when the sun goes does down, you start to feel tired. This may also be referred to as our circadian rhythm, but it also plays a role in regulating body temperature, the release of hormones, and physiological needs such as thirst. These processes become disrupted during times of jet lag and we feel fatigue, confusion, and mood changes as a result.

During a study involving physiologic testing in rats, researchers were able to interfere with the light information signal sent to the rodent’s suprachiasmatic nucleus (SCN)—a small region in the brain’s hypothalamus known to be the source of the circadian rhythm. They showed that the cells in the eyes expressed vasopressin—a naturally occurring neurohormone (also called antidiuretic hormone) that primarily serves to regulate blood pressure by the retention or expulsion of urine from the body. This neurohormone is also known to help SCN control the circadian rhythm.
This discovery of vasopressin-expressing cells in the retina provides more information on how the body processes light information to regulate our sleep-wake cycles. As we sleep, the level of vasopressin increases, which possibly the reason why most of us feel thirsty at night. In the past, researchers simply believed that light would reach the eye and travel to the brain, communicating the time of day to help regulate our circadian rhythm. But now they recognize that there are additional steps in that process, and this can help open additional avenues of study that may one day help humans control their biological clocks, maybe eliminating jet lag for good.

“Our exciting results show a potentially new pharmacological route to manipulate our internal biological clocks. Studies in the future which alter vasopressin signaling through the eye could lead to developing eye drops to get rid of jet lag, but we are still a long way off from this,” said Mike Ludwig

Eat these foods for better health

Staying fit and healthy in your golden years