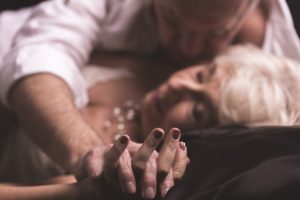 For many women experiencing menopause, low libido can be a problem. A new study by researchers at the University of Pittsburgh School of Medicine found that women in their 60s report a variety of reasons why their libido may be low, and it doesn’t always involve the hormones associated with menopause.

The study published in the journal Menopause showed that up to 40% of women over the age of 60 have low libido and 10% of those feel bothered by it. Most people think that only hormones associated with menopause are to blame for low libido such as estrogen and progesterone. However, this study shows how there may be a variety of reasons for the sexual dysfunction.

To help understand this issue, Holly Thomas, M.D., M.S., assistant professor of medicine at Pitt and her team conducted a study on low libido during menopause. They conducted three 12-woman focus groups and interviewed 15 other women privately, depending on the preferences of the participants.

“If a woman is having sexual problems, what’s going on with her partner may be contributing. Sex doesn’t occur in a vacuum,” said Thomas.
“Some women find workarounds, but others get stonewalled by their partner because he feels defensive. As women we’re encouraged to be accommodating, so we learn to tamp down our own needs and desires and prioritize those of others,” she added.

Other than sexual dysfunction in partners, another major contributor to low libido was that the women did not view sex as a priority. One participant in the study in particular shared that low libido was due to stress in her life. She was caring for her ailing mother while simultaneously supporting her daughter through recovery from a substance abuse disorder. She felt that these priorities were far more important than making time for her sex life.

There were several limitations of this study as it was small, had a lack of quantitative data, and was racially homogeneous. However, since most research on low libido during menopause focuses on hormones, hearing detailed accounts from women themselves help to understand the overall picture that may not come out of a large survey.