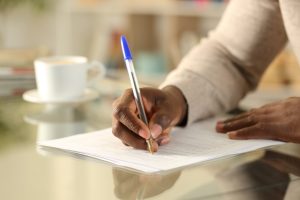 Penmanship truly is a lost art. But it’s not just that keyboards and screens are robbing the world of beautifully crafted shapes, letters, and stories. They could be slowing your brain down too.

New research suggests that handwriting may be the best modality to learn new information. A study published in Psychological Science found that adults who handwrote letters from an unfamiliar alphabet picked them up much faster than those who typed on a computer or watched videos to learn it.

Researchers did their experiment on 42 adults charged with learning the Arabic alphabet. They were separated into three groups: video watchers, typists, and writers.

Each participant learned the letters one at a time by watching them being drawn and explained on screen.

The video group then received an on-screen flash of each letter and was asked if it was the same letter they had just seen. The typist group had to locate the letter on a keyboard, and the writers copied it using a pen and paper.

Although each of the groups was able to demonstrate a strong understanding of the letter with six sessions, the handwriting group learned much faster, with many learning the skills after just two sessions.

These results indicate that writing may be the brain’s preferred method of learning and storing memories.

Typing on screens is indeed convenient, but it might not be best if you’re trying to remember. Writing down lists, appointments, and other information you’d like to retain might best be done with a pen and pad.

The researchers suggest the act of handwriting reinforces visual and aural lessons. You may remember moving your hand in a certain way, or seeing yourself put the note down in your own writing, which helps you recall it later. It could just be that you’ll remember creating the note.

In any event, you may notice you’re remembering faster and better by handwriting. Give it a try and revive the lost art of penmanship!