Home » Diabetes » Is the Paleo diet safe for diabetics?

Close to four million years ago cavemen roamed the planet and, while every aspect of life has evolved since then, scientists say their Paleo diet could be of benefit to diabetics today.

The Paleo diet has many names – some refer to it as the caveman diet; others call it stone-age diet or hunter-gatherer diet. Whatever the case, it is assumed the diet includes food available to humans prior to the establishment of agriculture. The Paleolithic period was about 2.5 million years ago; around the time humans first started using stone tools.

A caveman did not go hungry. Wild animal, fish, fruits, roots, nuts and eggs were part of the regular diet. Items such as grains, dairy products, salt, sugar and processed oils were not available since humans had not yet begun cultivating plants or domesticating animals.

Is the Paleo diet safe for diabetics?

Nutritional experts say that eating Paleo can remove foods from your diet that can disrupt your blood glucose the most. It can also help people lose weight. For starters, there are not a lot of carbohydrates involved in this diet. One of the benefits of the Paleo diet is that it provides foods that are satisfying and blood sugar balancing at the same time. This means that people feel full and experience fewer cravings. Type-2 diabetes happens when you eat too many carbohydrates/sugars and your body becomes desensitized to insulin. Since eating Paleo eliminates refined sugars, as well as grains that can spike your sugar, it is very effective for diabetics.

Diabetics are often treated with medications. Some increase the release of insulin, others slow down the release of glucose from the liver. There is also medication that suppresses appetite. For many people these remedies come with side effects, yet the Paleo diet does not.

Poor diet and exercise are two big contributors to diabetes, so it makes sense that some sort of diet would be part of the solution. Research has shown that the Paleo diet is more effective for diabetics than most low-fat diets, and can lead to greater fat loss and metabolic improvements. It can also lead to better improvement in blood pressure and kidney function than most other diets.


Effects of the Paleo diet on type-2 diabetics 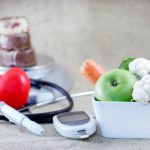 Nutritional experts who promote the Paleo diet believe that we are biologically adapted to consume pasture raised meat, fish, seafood, eggs, vegetables, fruits, etc. They do admit that there is one item missing from the diet and that’s calcium. For those who are interested in trying this diet, supplementing with calcium may be important.

What really stands out though, is the effects of the Paleo diet on diabetics. Evidence seems to suggest that this caveman menu is not only safe for those suffering from diabetes but is beneficial, especially for those who don’t respond well to traditional therapies.

A 2009 study reported in Cardiovascular Diabetology outlined the effects of the Paleo diet on type-2 diabetes.  The standard diabetes diet consists of carbohydrates. As mentioned above, the Paleolithic diet is based on lean meat, fish, fruits, vegetables and nuts. Over a three-month period participants consumed either a Paleo diet followed by a diabetes diet or the same two diets in the opposite order. The Paleo diet led to significantly lower blood pressure, weight, body mass index (BMI), triglyceride levels and waist circumference; while high-density lipoprotein values were higher. The study noted a number of improvements in cardiovascular risk factors as well, compared to people on the standard diabetes diet.

Earlier this year, a study was published in the Journal of Clinical Nutrition that focused on the effects of the Paleo diet on diabetics, especially those who suffer from type-2 diabetes. The authors of the study compared diabetics consuming a standard American diet with those consuming the Paleo diet. They measured blood pressure, urine electrolytes, insulin resistance as well as lipid levels. What they discovered was that the diabetics who were on the Paleo diet showed much greater improvements in both insulin control and lipid levels. This means that they had a better ratio of good cholesterol and fat to bad compared to the group on the standard American diet. They also realized the people that were on the Paleo diet experienced a significant improvement in insulin sensitivity, leading them to believe that even a very short time on a Paleo diet would be preferable to an American Diabetes Association diet for insulin control in those with type-2 diabetes.

Another research study published in the European Journal of Clinical Nutrition last April outlined similar results and in October, 2014, Lipids, Health and Disease showed that a Paleo diet improved cardiovascular risk factors which are linked to diabetes.

Is the Paleo diet right for you?

You can see through the Paleo diet and diabetes research that the life of the caveman can still have an influence on us today. The Paleo diet is rich in vitamins and minerals, unprocessed foods and foods that don’t trigger allergic reactions as much as the standard American diet does. People who suffer from diabetes just might benefit from improved glucose control, weight loss and better blood pressure on this diet. It is very important to note that people who have type-1 diabetes – who produce no insulin – would not be able to stop their medications and follow a Paleo diet. Not enough research has been conducted on the effects of the Paleo diet on people with type-1 diabetes.

Since each of us can have a different set of underlying health conditions, it is important to consult a doctor before starting any new diet. If, for example, you have kidney problems or are on certain medications, you may not be able to safely follow the Paleo diet. The caveman menu does include large amounts of “bulky” foods, so anyone with intestinal problems will not be able to handle it comfortably.

People who aren’t sure about making a complete commitment to the diet to manage their diabetes might want to think about including a few aspects into their diet, such as more berries and vegetables and fewer breads. 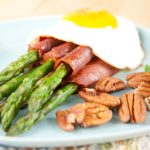 While on the surface you may think it doesn’t sound very extensive, the Paleo diet food list for diabetics does include a lot of variety. Here are some examples of what you can find on a Paleo menu.

While on the Paleo diet you avoid dairy, grains, processed foods and sugars, starches, legumes and alcohol. Some people refer to this as “cleaner eating.”

The subject of Paleo diet and diabetes is getting more attention from nutritionists and dieticians. While it may not be the diet of choice for everyone, the mounting evidence of the effects of the Paleo diet on diabetics means more people are taking notice.

Close to 30 million Americans suffer from diabetes. The North American diet is high in fat and processed and preservative ridden foods. With diet being one of the biggest factors impacting diabetes, the Paleo diet is hard to ignore.

Paleo diet: Is eating like cavemen best for our health?

It may be hard to consider now, but the dawn of man produced hunters and gatherers and humans had to get their own food – not by heading to the supermarket. Continue reading…

In the world of diets it’s hard to pick the one best suited for you. This is why it’s important to understand each diet and how each one can help you achieve your goals. Both the Paleo diet and ketogenic diet have been… Continue reading…