Home » Health News » Is One Type of Fiber Better than the Other? 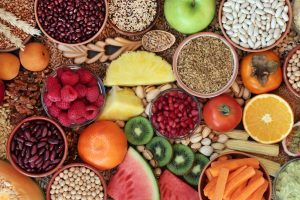 I saw something the other day that made me stop and think if I’d been doing it all wrong.

You see, I’m big on fruit and vegetables. Cereals and grains, not so much. I eat a lot of oats, but other than that, the occasional serving of rice, quinoa, or couscous is about it.

What got me thinking was a study I saw. It had found that the fiber in cereals, but not fruits and vegetables, was the most effective at battling inflammation. Was my body raging out of control with cytokines and other inflammatory markers destroying my organs?

No matter where you’re getting it, fibre has the potential to aid health and directly, or indirectly, influence inflammation. Both types of fiber – soluble and insoluble fiber – are typically available in most fibrous foods. Yes, some have more of one than the other, but a balanced diet – even if it is relatively low in cereals – will hit you with both.

It’s very easy to get caught up in the “eat this, not that if you want…” hype. But unless you’re talking about an overall improvement in diet, like moving from a high intake of processed foods to more natural and plant-based foods, it’s really just splitting hairs.

Thinking that your diet isn’t healthful because you eat more fruit, vegetables, beans, and such, and less cereals is ludicrous, isn’t it? The former are not only good sources of fiber, but are rich in a ton of other nutrients that have been shown to battle inflammation and promote longevity.

For most people, getting 28-35 grams of fiber from various sources is the best scenario to get the biggest benefits. If you’re getting more of it from fruits and vegetable, don’t sweat it!