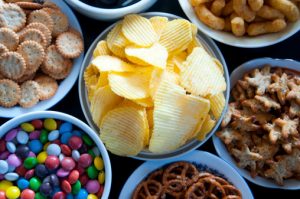 We know that obesity is on the rise, but is junk food to blame? It’s easy to blame soda, candy and processed food, but new research suggests our poor diets aren’t necessarily the cause of the obesity epidemic. The findings come from the Cornell University Food and Brand Lab. The researchers uncovered that the consumption of junk food isn’t solely to blame for rising body mass indexes (BMI).

Researchers reviewed data of a nationally representative sample of U.S. adults. What they found was that junk food consumption was not linked with higher BMI for 95 percent of the population. The exception was for those who were severely underweight or morbidly obese. The researchers found minimal differences between healthy weight and overweight consumption of junk food, which led researchers to their conclusions.

Co-director David Just said, “This means that diets and health campaigns aimed at reducing and preventing obesity may be off track if they hinge on demonizing specific foods. If we want real change we need to look at the overall diet, and physical activity. Narrowly targeting junk foods is not just ineffective, it may be self-defeating as it distracts from the real underlying causes of obesity.”

The findings suggest that doctors should examine eating and snacking patterns instead of just eliminating junk food when they are helping their patients battle weight loss.

The findings were published in Obesity Science and Practice.