Home » Health News » Is It Healthier to Eat a Cheeseburger and Fries at Dinner Than It Is at Lunch? 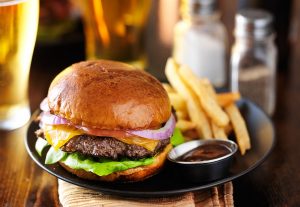 Is it healthier to eat a cheeseburger and fries at dinner than it is at lunch? It could be, based on your interpretation of a new study looking at food choices, nutrient timing, and heart health.

But that doesn’t mean doing so is good for you.

Researchers found that adults favoring a Western-style lunch, heavy on processed meat cheese, refined grains, fat, and sugar, had a much higher risk for early death from heart disease.

On the other hand, those who ate more vegetables had a lower risk.

But there was a rather interesting finding. Researchers specified western-style lunches as a major risk factor for heart disease. They also noted that eating vegetables at dinner time had a big benefit, but people who ate more veggies at lunch didn’t have the same result.

Here are some of the numbers:

The study is interesting but is in no way a dietary guideline. Focusing on overall diet quality is the most important thing for your heart and is right up there with activity.

Eating fruits and vegetables, roughly two/three and three/four servings per day, is the best strategy. It allows for a regular flow of fiber and nutrition to the body. Don’t think that your salad, nuts, and apple for lunch aren’t beneficial because of this study’s findings.

As always, limit intake of fatty foods and avoid them in between means for the best shot at a healthy heart.