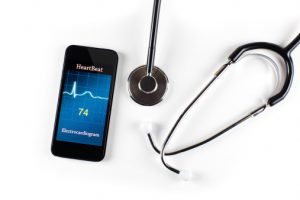 A newly created device along with an iPhone app may soon replace stethoscopes as they have been shown to be an effective tool to track the heartbeats of patients. The device is called HeartBuds and it is slightly larger than a quarter.

Dr. David Bello, developer of HeartBuds, said, “They not only detect sounds inside the body just as well – or better – than traditional stethoscopes, but they are more sanitary. And because they incorporate smartphone technology, we can now record, store and share those sounds as well. This could change the way we approach patient exams in the future.”

The stethoscope we grew up with was originally invented in 1816 by French doctor René Laennec and has gone through very minimal changes since. On the eve of its 200th anniversary a change has finally been made that could forever change the way doctors listen to the human heart.

The device looks like the end of a stethoscope, but instead of being attached to Y-shaped tubes that end up in the doctor’s ears, it plugs into a smartphone. An app is then activated and the sounds are played through the speakers of the phone and an image appears on the screen, showing the heart’s rhythm as it corresponds to the sound.

Traditionally, only the doctor with the stethoscope would be able to hear the heart, but this new device allows both the patient and the doctor to have a listen. Furthermore, doctors can now control the volume and record sounds for future reference.

Julio Schwarz, M.D., who co-authored a clinical trial for HeartBuds, said, “The technology is great, but we wanted to see how our device actually fared against more traditional stethoscopes. So we put them to the test.”

In the clinical trials doctors examined 50 patients, comparing the use of two traditional stethoscopes: a disposable version and HeartBuds. HeartBuds performed equally as well as the pricier stethoscopes in detecting murmurs, while the disposable ones did not, which raised concerns.

Valerie Danesh, Ph.D., study author, explained, “Many facilities have started using disposable models after several studies, particularly overseas, showed there can be a 30 to 40 percent potential risk for transmitting harmful bacteria through stethoscopes. These findings may cause some to reconsider that practice.”

When they are not using a disposable model doctors are using a pricier one that touches hundreds of patients a month, and, despite their best efforts, the spread of bacteria is still a real threat. Arnold Einhorn, M.D., HeartBuds developer, said, “Because the HeartBuds device doesn’t have earpieces, we no longer have to worry about that. This device is much less expensive to produce and offers a safer alternative to both traditional and disposable models without sacrificing sound quality.”

HeartBuds also holds promise for resident teaching as the students and doctors can all listen to what is going on together and discuss findings.

Dr. Bello concluded, “Though trained health care providers are the only ones who can use HeartBuds as a diagnostic tool, they do have many other uses. They can take a recording of their heart and lungs at home, upload them and send them to their doctor, who can evaluate them without the patient ever leaving home if it’s not necessary. Really, the possibilities are endless and the future of this technology is just now coming into view.”