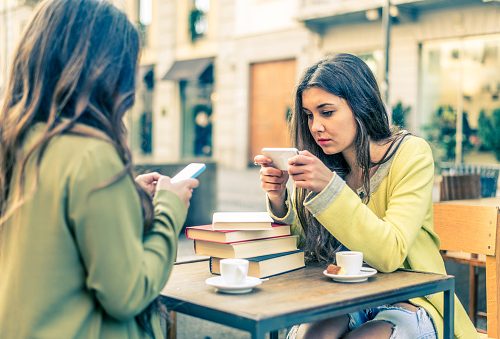 A lot can change in 10 years, and nothing has been as impactful on human life recently than the introduction of the smartphone. These tiny pocket-sized devices are essentially small computers with the processing power to do most things only a desktop computer could do not so long ago.

But is this new innovation having a positive impact on human beings? Yes, they have made it more convenient to communicate and research information, but at what cost?

According to a new study, this luxury has created imbalances in the brain chemistry of young people addicted to their smartphones and the internet.

Current studies report that about 46 percent of Americans say they cannot live without their smartphones as they have become more dependent on them to receive their news, information, play games, and of course, use it to make calls.

There is no other group of individuals who are more “glued” to their smartphones than the younger generation. In fact, most of their time is spent staring at phone screens. This could have long-term consequences that are currently unseen.

The study in question looked at 19 young individuals who classified themselves as being addicted to the internet or their smartphone and matched them with an equal number of healthy counterparts not addicted to smartphones.

The study found that those who scored the highest additionally had higher scores in depression, anxiety, insomnia, and impulsivity.

MRS scans were done before and after behavior therapy of addicted individuals as well as on control subjects. The focus of the scan was to measure levels of gamma-aminobutyric acid (GABA) and glutamate-glutamine (Glx) levels.

GABA is a neurotransmitter that inhibits or slows down brain signals. Glx is also a neurotransmitter, but it causes neurons in the brain to become more electrically excited. GABA has been previously linked to aspects of vision and motor control as well as the regulation of various brain functions.

It was discovered that, when compared to healthy adults, the ratio of GABA to Glx was significantly increased in the anterior cingulate cortex of the brain in addicted individuals.

“The ratios of GABA to creatine and GABA to glutamate were significantly correlated to clinical scales of internet and smartphone addictions, depression and anxiety. Having too much GABA can result in a number of side effects, including drowsiness and anxiety,” said Dr. Seo.

However, it was found that these increases can be normalized after cognitive behavior therapy.

While more research is needed, the researchers believe that their study may contribute to the future treatment of addictions.

Related:
The future may allow diabetic treatment to be controlled from your smartphone

Germs on your smartphone reveal your lifestyle