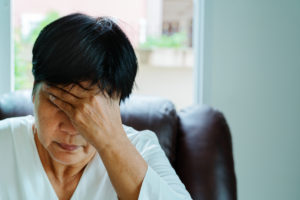 Among the older population, health care professionals are noticing an increase in depression in those who suffer from insomnia. Researchers from John Hopkins recently studied the effects of lack of sleep among seniors and found a relationship to depression and thinking problems.

The study, published in the journal Sleep, looked at data from nearly 600 people over the age of 60 who visited primary care centers in New York City, Philadelphia, and Pittsburgh. All had some level of depression.

It was found that patients with worsening sleep problems were about 28 times more likely to be diagnosed with major depression at the end of the 12-month study. Compared to patients whose sleep improved, those whose sleep worsened also had nearly 12 times the odds of minor depression. They were also 10% more likely to report having suicidal thoughts, according to the Johns Hopkins Bloomberg School of Public Health study.

For patients who exhibited persistent but not worsening insomnia, they were more likely to have lasting depression. However, their risk was not as high as patients whose sleep got worse.

“These results suggest that, among older adults with depression, insomnia symptoms offer an important clue to their risks for persistent depression and suicidal ideation,” said study senior author Adam Spira, a professor of mental health at Johns Hopkins in Baltimore.

“We can’t say that the sleep disturbances we’re seeing are necessarily causing the poor depression outcomes,” he said in a Hopkins news release. “But the results suggest that older adults who are being treated for depression and whose sleep problems are persistent or worsening need further clinical attention.”

A separate study also published in the same journal shows the relationship between insomnia and cognitive decline, compared to those with no sleep problems. Although previous studies have suggested links between insomnia and cognitive problems, results have been inconsistent, some study populations have been small, or people with chronic insomnia disorder have been lumped with those with insomnia symptoms and other contributing issues, such as chronic pain, depression, or anxiety.

The relationship between sleep, depression, and thinking problems are still being studied, and experts are trying to understand the link between all three. Until the relationship is known, doctors do stress the importance of getting regular uninterrupted sleep. This can help to prevent both cognitive decline and depression in older adults.