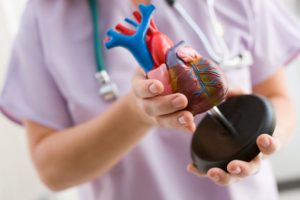 Unlike the zebrafish, mammals do not have the ability for cardiac regeneration. Currently, the human body can regenerate the liver and skin, but although we know that the heart cannot regenerate, the reason why has never been answered, until now.

Researchers from the University of Erlangen-Nuremberg conducted new research which explores why the heart doesn’t regenrate.

“This disassembly process proceeds by some proteins leaving the centrosome and relocating to the membrane of the cell nucleus in which the DNA is stored,” said Felix Engel from Florida Atlantic University. “This process causes the centrosome to break down into the two centrioles of which it is composed, and this causes the cell to lose its ability to reproduce.”

In almost every cell can be found the centrosome. Through experimentation it has been revealed that if the centrosome is not intact, the cell can no longer reproduce. Questions were raised as to how much the centrosome can be manipulated. As seen in cancer, it can spread quite rapidly.

Researchers looked to determine if the state of centrosome integrity is regulated naturally in mammals to control reproduction of particular cells.

David Zebrowski, another researcher, said, “We were incredibly surprised to discover that the centrosome in the cardiac muscle cells of zebrafish and amphibians remains intact into adulthood. For the first time, we have discovered a significant difference between the cardiac muscle cells of mammals and those of zebrafish and amphibians that presents a possible explanation as to why the human heart cannot regenerate.”

By uncovering that centrosome integrity is in fact regulated allows for many possibilities for future research. To start, the findings show possible attempts to stimulate reproduction of cardiac muscle cells as a means for reproduction. Centrosome integrity can also be observed to locate adult cardiac muscle cells that retain their ability to reproduce – this can lead to new medical treatment. Lastly, the findings may help with methods to inhibit the spread of cancer cells.

The findings were published in the journal eLife.