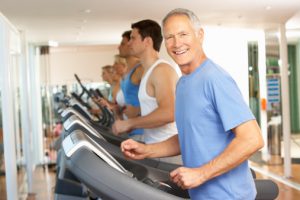 Old and frail are two words that usually go hand in hand, because as we age, our bones and muscles deteriorate and become weaker. Rigorous exercise is not something that the elderly population does often, and they aren’t expected to. But this is exactly what researchers from the University of Buffalo are proposing — preclinical studies have found that high-intensity interval training (HIIT) can reverse frailty.

HIIT is a form of intense aerobic exercise with fewer recovery periods. It often consists of shorts bursts of high-intensity exercise followed by a brief low-intensity activity. Usually done in circuits, the point is to exercise until you are exhausted.

Several studies have found that HIIT can lead to significantly improved cardiovascular fitness and can lower insulin resistance and other metabolic diseases.

The researchers recognize that being frail puts people at increased risk of dying and comorbidity. But to test their theory, they didn’t use any elderly people. Instead, they experimented on mice subjects first.

Using mice to test their hypothesis

Two groups of mice consisting of 12 mice each were selected. It was imperative that these mice were at least 24 months old, which roughly correlates to a 65-year-old human. The mice had been sedentary up until the study.

The researchers developed measuring techniques that were the mouse equivalent of measures that assessed human frailty. These included grip strength, endurance, and walking (gait) speed. A base line was set before the experiment began.

Both groups of mice were subjected to a 10-minute workout program that involved a three-minute warm-up, three intervals of high intensity, one minute of low intensity, and one minute of higher intensity exercise on an incline treadmill. All exercises were done three times a week over a period of 16 weeks.

The results of the study were quite surprising. The mice showed dramatic improvements in numerous measurements including muscle mass, strength, and physical performance. More amazing was the fact that five of the six mice who were frail or pre-frail showed improvements from their baseline measurements, and four mice were no longer considered frail at all.

“Because the performance measures for the mice are directly relevant to clinical parameters, we think this program of exercise is quite applicable to humans. We’re laying a foundation so we can do this in people and so we can understand how to tailor it to individuals so they can successfully implement this,” said Bruce R. Troen, MD, senior author of the study.