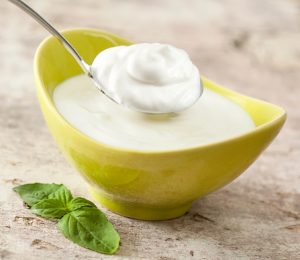 Inflammatory bowel disorders (IBD) may be alleviated by protein from probiotic bacteria in yogurt and dairy products. The protein – known as P40 – was found to be effective in animal models of colitis, a type of inflammatory bowel disease. The researchers demonstrated that P40 helped support intestinal epithelial cell growth and function, and reduce inflammatory response.

The researchers further showed the consumption of P40 in mice also helped prevent and treat colitis.

There are several different types of gut bacteria that help support a healthy body. There are also helpful bacteria found in food, in particular, dairy products. The most common and widely studied bacteria is Lactobacillus rhamnosus GG (LGG), which has been used in attempts to prevent intestinal disorders. Unfortunately, the studies have yielded mixed findings.

Although there is a growing body of research on probiotics and health, making definite claims is still too early. The exact role probiotics play in the gut is also unclear.

To test the effectiveness of P40, the researchers developed a gel bead to deliver the protein directly to the colon. In three different mouse models, P40 was found to treat and prevent intestinal injury and colitis.

Lead research Fang Yan explained the possible benefits of using P40, “One is bioavailability. Even if you eat live bacteria (as in yogurt), that does not mean 100 percent of bacteria will still be alive (and active) in your body.” The other advantage is that it is generally safe for most individuals. Yan did note, “In patients with immune deficiency, it could be a problem because it may induce an abnormal immune response.”

Diet can play a large role in the treatment of IBD. Although there is no solid evidence that certain eating habits can cause bowel disorder, certain foods are known to aggravate bowel conditions or cause symptom flare-ups.

There are common foods that have been found to cause problems in IBD. To detect your own specific food triggers, keep a food diary for logging your meals and documenting how you felt during and after the meal.

Here are some foods to limit or avoid if you have IBD:

Along with diet changes, there are lifestyle changes that can help improve IBD. For example, stress has been found to trigger or worsen IBD symptoms, so it’s important that you reduce your anxieties as much as possible. Some effective ways to lower stress are exercise, biofeedback, and regular relaxation and breathing techniques.

Exercise is not only an effective way to reduce stress, but it has also been shown to help improve IBD overall.