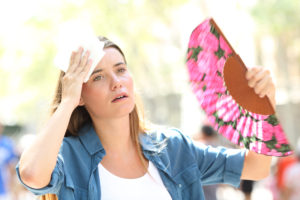 The higher the temperature, the higher the risk of death from heart disease, according to new research published in the journal Circulation. This study outlines the concerns that in traditionally hot regions, people may be more vulnerable to heart-related cardiovascular deaths.

The study outlined by the American Heart Association showed that the tipping point for those with cardiovascular disease comes when the temperature reaches a daily reading of 109 degrees Fahrenheit (43 C). This is not an unusual temperature reading in Kuwait, as the average ambient temperature there is 82.2 degrees Fahrenheit. Therefore, researchers decided to analyze data from participants in this country.

For the study, the relationship between temperature and more than 15,000 cardiovascular-related deaths were reviewed. It involved all death certificates in Kuwait from 2010 to 2016 that cited “any cardiovascular cause” for individuals ages 15 and older.

“While cardiologists and other medical doctors have rightly focused on traditional risk factors, such as diet, blood pressure, and tobacco use, climate change may exacerbate the burden of cardiovascular mortality, especially in very hot regions of the world,” said Barrak Alahmad, a mission scholar from Kuwait University.

Many specialists have come to a hypothesis behind the increased risk of heart disease in warmer temperatures. They believe it is due to the body trying to cool itself in response to when the body temperature increases. To do this, the body shifts blood from the organs to underneath the skin. This shift causes the heart to pump more blood, putting it under significantly more stress.

“The warming of our planet is not evenly distributed. Inherently hot regions, like Kuwait and the Arabian Peninsula, are witnessing soaring temperatures unlike ever before. We are sounding the alarm that populations in this part of the world could be at higher risk of dying from cardiovascular causes due to heat,” said Alahmad.”Although we cannot conclude it from this analysis, men and working-age people may have been at greater increased risk because of spending more time outside. We need to explore this relationship further and consider serious preventive strategies that could reduce the impact of rising temperatures on our health.”

This study helps to get the conversation started on the dangers of high temperatures, especially for those over the age of 65. Unfortunately, this study was limited by its lack of information regarding the specific type of heart problem that each individual may have had before their death. Although this research was able to find a strong connection between extremely high temperatures and increased cardiovascular deaths, further research is needed to establish a cause and effect relationship.