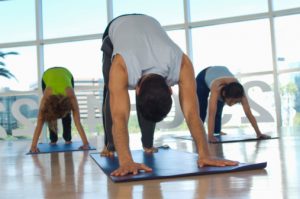 Research from Harvard and Johns Hopkins University unveils that over the last 10 years there has been an increase in journal articles on the topic of yoga therapy as a means of reducing symptoms associated with disease and illness.

Over the years yoga has become increasingly popular among all age groups. Promoted as a wellness exercise, yoga is a Hindu spiritual and ascetic discipline. It combines meditation, breathing exercises and different body postures to boost health and achieve relaxation.

For the study, researchers conducted a large-scale analysis of published studies over the span of 46 years, 29 countries, and involving more than 28,000 participants. What they found was peer-reviewed journals discussing yoga therapy had increased three-fold. The increase was seen despite limitations and challenges which yoga faces, such as standardization, limited funding, time and resources.

Yoga therapy is commonly used in the treatment of mental health, cardiovascular problems and respiratory disease. Although the previous research suggests yoga is a medicine alternative, more concrete evidence is required to create changes in the healthcare system that will incorporate yoga as a viable treatment method.

The International Association of Yoga Therapists is a group whose goal is to achieve recognition for yoga as a form of treatment. They are responsible for many publications and putting out resources to educate the population about the benefits of yoga therapy.

Taken from Yoga Therapy Toronto, “The other key advantage of yoga is that it empowers people in the healing process. Rather than being a passive recipient of treatment, the student is actively engaged in the path to well-being and is primarily responsible for their recovery.”

Unlike typical yoga classes, yoga therapy is taught in a one-on-one setting. The teacher recommends a program specific to the individual based on their unique needs and health problems. The main goals of yoga therapy are to promote wellness, help people cope with stress, target the root cause of affliction, minimize symptoms and reduce suffering.

The findings were published in The Journal of Alternative and Complementary Medicine.