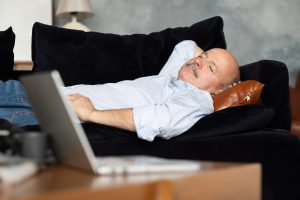 Over the past decade, there have been many studies performed examining the relationship between sleep and dementia, but new information is now signalling a link between daytime napping and cognitive impairment. Daytime napping among seniors is a normal part of aging, but it may also foreshadow Alzheimer’s disease and other dementias for those who do it often.

The new study was led by UC San Francisco and Harvard Medical School together with Brigham and Women’s Hospital. It departs from the original theory that daytime napping in seniors is purely to compensate for poor nighttime sleep. Researchers say this information points to work by other UCSF researchers that suggest dementia may affect the wake-promoting neurons in the key areas of the brain.

For the study, researchers tracked data from 1,401 seniors who were followed for 14 years. The participants’ average age was 81, and approximately 3/4 were female. Each participant was required to wear a watch-like device that tracked mobility. Each period of non-activity from 9:00 AM to 7:00 PM was interpreted as a nap.

This research adds to the mounting evidence from a 2019 study that found older men who napped 2 hours a day had a higher odds of developing cognitive impairment compared to those who napped less than 30 minutes a day.

Yeu Leng, the co-senior author of the study, explained, “I don’t think we have enough evidence to draw conclusions about a causal relationship, that it’s the napping itself that caused cognitive aging, but excessive daytime napping might be a signal of accelerated aging or cognitive aging process.”

Taking a positive approach to brain function is vital as we age. Numerous factors can take a toll on the ability of the brain to function at peak potential, which can affect concentration, memory, and overall cognitive function.

While some degree of cognitive decline is nearly inevitable, it is possible to take steps to help reduce any risks. The Smart Pill contains 9 ingredients to support, nourish, and maximize brain health, including ginkgo biloba, huperzine A, bacopa extract, rosemary extract, and a B vitamin complex.

By following a healthy lifestyle, you can help to reduce the risk of cognitive impairment. Be sure to get 7 to 8 hours of sleep a night, eat a healthy diet, and supplement with essential vitamins and nutrients that can help boost circulation, fight free radicals, and provide extra nutritional support.