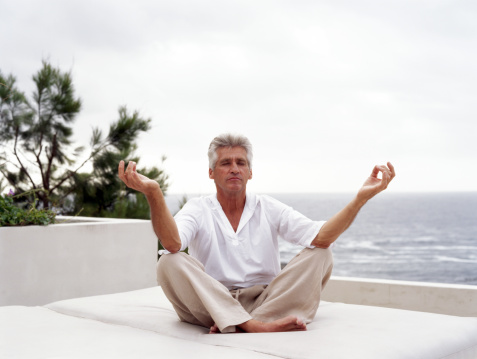 Every day, there seems to be a new benefit of yoga that really solidifies it as a form of exercise we should all partake in. There is yoga to reduce stress, improve digestion, improve mobility, and now you can add improving symptoms related to prostate cancer to the list of benefits.

For years, we’ve known that yoga can help improve symptoms like emotional and physical fatigue associated with cancer treatment. Now, the latest findings suggest that yoga can specifically aid in symptoms of men with prostate cancer.

Principal investigator Dr. Neha Vapiwala explained, “The data are convincing. What we need now is a better understanding of how and why yoga produces these benefits.”

Fifty men with early or advanced non-metastatic prostate cancer were enrolled in the study. Twenty-two of the men were assigned to weekly yoga classes and the others were not. All of the men had scheduled radiation therapy, 29 were on hormones, and 19 were previously surgically treated.


The men in the yoga group took part in Eischens yoga, which focuses on holding and maintaining poses. The sessions were 75 minutes in length and consisted of a variety of poses, which the men held. The participants were asked to rate their level of fatigue, sexual symptoms, and urinary symptoms prior, during, and after the study ended.

Dr. Vapiwala added, “Ordinarily, you’d expect symptom scores to decline with continuing treatment. But in the yoga group, the changes were notably positive.”

Yoga may improve urinary and erectile symptoms because yoga strengthens the core and helps to improve blood flow.

It is something that can be tried by people of all ages and abilities, so you shouldn’t be worried that you are doing it wrong or that you are not fit enough to complete it. As long as you join a guided class, the instructor will offer you modifications of positions and holds so that you’re comfortable and can still perform them.

Dr. Vapiwala concluded, “Regardless of how you view your own fitness, it’s important to keep an open mind. There’s something to be said for finding the right group and the right instructor. But you might be surprised at what you can do!”