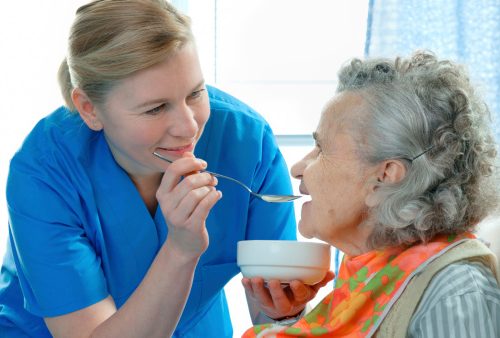 Atrophy in the cingulate cortices, thalami, and cerebellum was observed on MRI in patients with behavioral variant frontotemporal dementia that was associated with an increase in caloric intake.

The study involved the recruitment of 49 patients with dementia. Their eating habits were compared with 25 controls. Groups consisted of frontotemporal dementia patients, Alzheimer’s disease patients, and semantic dementia patients.

Behavioral variant in the FTD group was more functionally impaired, compared to the Alzheimer’s disease group. This variant was also closely related to eating behavior changes.

Patients were given an ad libitum breakfast test meal. Their total caloric intake and food preferences were measured. They were offered three different desserts and were asked to rate how much they enjoyed them. The desserts had varying sucrose levels of 26 percent, 39 percent, and 60 percent.

The researchers found that FTD patients with behavioral variants had the highest caloric intake of 1,344 calories, whereas Alzheimer’s disease patients consumed 710 calories on average, and semantic dementia patients consumed 573. Control patients had a mean average of 603 calories.

Patients who preferred sweeter desserts were found to have volume loss in bilateral orbitofrontal cortices and insula-striatal structures.

Jennifer L. Whitwell wrote in an accompanying editorial, “This study should be applauded for performing such detailed and prospective assessments of eating behaviors in frontotemporal dementia.”

As frontotemporal dementia progresses, caregivers must devote more of their time to FTD patients, as they cannot perform many normal, everyday tasks on their own anymore. These may involve showering, feeding, and getting dressed.

Exercise has been shown to be a great treatment option for FTD patients as it helps alleviate low mood and improve thinking skills. Aromatherapy, music therapy, and pet therapy have all been shown to help improve outcomes of FTD and dementia, too.

Rearranging and adjusting a patient’s home is also useful to simplify it in order to avoid complications. For example, ensuring objects are not placed in the middle of the floor and kept off to the side instead. Removing rugs and other injury hazards is a good idea, too.

Behavior problems can be reduced with the help of caregivers by adhering to the following:

Medications, antidepressants, and antipsychotics can all aid in better management of FTD and dementia, too. Working closely with a doctor can help better provide the skills and knowledge caregivers require in order to properly care for dementia patients.

ALS has been linked with frontotemporal dementia. You may be familiar with ALS because the disease was brought to the world’s attention by YouTube’s successful “ALS Ice-bucket-challenge.” Amyotropic Lateral Sclerosis (ALS) is a devastating disease of the nervous system, especially the part that controls voluntary movements, such as speaking, walking, breathing, and swallowing. Continue reading…

Frontotemporal dementia (FTD) is a group of disorders characterized by the progressive loss of nerve cells within the brain’s frontal lobes (found directly behind the forehead) or temporal lobes (areas behind the ears). When nerve cells are lost in these areas of the brain, behavior and personality can begin to deteriorate along with changes to language and changes to muscle or motor functions. Continue reading…