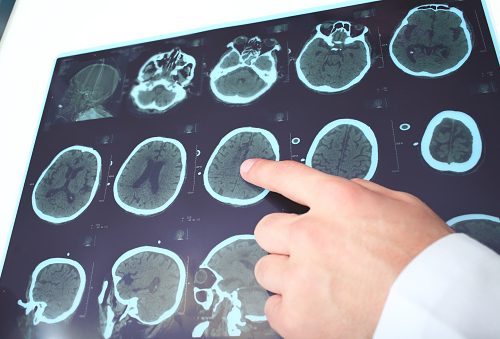 The lamin nucleoskeleton surrounds the nucleus, which is the control center of cells. In Alzheimer’s disease, the nucleoskeleton is found to be disordered. For the first time researchers found how lamin dysfunction contributes to cell death. The study explored fruit fly models and further confirmed the findings in autopsies of brain tissues from patients with Alzheimer’s, whose brains were donated by their families.

Using super-resolution microscopy to analyze the fruit flies and the human brains, the researchers found features that resemble tunnels in the lamin of those affected by Alzheimer’s disease.

The researchers also explored fruit flies with Huntington’s disease and did not find the same patterns in the lamin. The findings suggest that lamin dysfunction is specific to Alzheimer’s disease.


Alzheimer’s disease and its effect on brain health

Although brain does shrink with aging, the number of neurons normally lost is not nearly as large as in Alzheimer’s disease. In Alzheimer’s, the neurons stop functioning, lose connections with other neurons, and die. Vital brain processes – such as communication, metabolism, and repair – become disrupted.

Memory-related neurons are the first to get destroyed, and as the disease progresses, other areas of the brain become affected, including parts responsible for language, reasoning, and behavior.

Some main characteristics commonly seen in Alzheimer’s disease include:

Amyloid plaques: found in spaces between neurons, they consist of abnormal deposits of protein fragments that clump together.
Neurofibrillary tangles: located inside the neurons, these are clumps of the protein tau, which goes through abnormal chemical changes.
Loss of neuronal connections and cell death: synaptic connections between certain neuron groups stop functioning and degenerate. Loss of neuron connection means lack of function, so they die.

There are many speculations with regards to the exact cause of Alzheimer’s disease, but as of now, there is no known cause. Research is conducted daily to better understand Alzheimer’s disease to not only establish its cause, but to work towards treatment and prevention options as well.

Until very recently, tau tangles in the brain were associated with Alzheimer’s disease, but now a recent study out of Australia links tangle buildup in the brain to type 2 diabetes. According to the author of the study Dr. Velandai Srikanth, an associate professor and specialist senior geriatrician at Monash University in Melbourne, diabetes may be linked to the buildup of “tangles” in the brain, separate from Alzheimer’s disease. Continue reading…