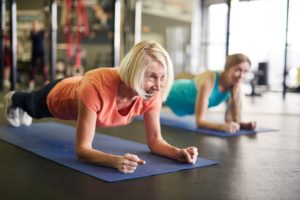 It is never too late to start a fitness routine if you want to reduce the likelihood of getting dementia. New research shows that staying fit or improving fitness could be one of the best medicines to help improve cognitive functions.

Atefe Tari of the Cardiac Exercise Research Group (CERG) at the Norwegian University of Science and Technology (NTNU) was the lead author of the study that was published in The Lancet Public Health.

Tari spoke about the research, saying, “It is important to say that it is never too late to begin exercising. The average participant in our study was around 60 years old at baseline, and improvement in cardiorespiratory fitness was strongly linked to lower dementia risk. Those who had poor fitness in the 1980s but improved it within the next decade could expect to live two years longer without dementia.”

The study is not the first to show a link between fitness levels and a lower risk of cognitive impairment. What makes this research unique, however, is that Tari and her team measured the fitness levels of participants twice, ten years apart. This made it possible to evaluate how changes in fitness over time are related to dementia risk.

Researchers found that there were clear results. “Persistently low fitness is an independent risk factor for dementia and death due to dementia,” the authors concluded.

A Decline in Memory

It is estimated that by 2050, 150 million people in the world will have dementia. Dementia is an overall term for diseases and conditions characterized by a decline in memory, language, problem-solving, and other thinking skills that affect a person’s ability to perform everyday activities. Alzheimer’s disease is the most common cause of progressive dementia in older adults. Unfortunately, there is no cure for the disease. On average, men live five years after being diagnosed with dementia, and women live for seven-year on average.

“As there is currently no effective drug for dementia, it is important to focus on prevention. Exercise that improves fitness appears to be one of the best medicines to prevent dementia,” says Tari.

“If you increase your cardiorespiratory fitness from poor to good you almost halve the risk of getting dementia. You also reduce the risk of dying from or with dementia. In our study, each increase of 1MET was associated with a 16 percent lower risk of getting dementia and a 10 percent lower risk of dementia-related death. This is an improvement that is very achievable for most people,” she added.

A MET is a measurement unit used by researchers to quantify the rate at which a person expends energy relative to their body weight.

To investigate the associations between physical activity and dementia, Tari used data from two different databases, the Health and Memory Study in Nord-Trøndelag and the Norwegian Cause of Death Registry. She found that the risk of developing dementia was 40 percent lower for those who were among the 80 percent with the best fitness. It was also found that participants who changed from a poor fitness routine to a higher level during the ten-year follow-up showed a 48 percent lower risk level of developing dementia.

This research provides good evidence to show that maintain high fitness levels are suitable for the brain. It has been shown in previous studies that those who show low fitness levels have an increased risk of heart attack, atrial fibrillation, depression, high blood pressure, and non-alcoholic fatty liver disease, and also that they generally die younger than people who achieve a higher fitness level.

“High-intensity exercise improves fitness faster than moderate exercise, and we recommend that everyone exercise with a high heart rate at least two days each week. Regular exercise that makes you sweaty and out of breath will ensure your fitness will be good for your age. Our study suggests that good fitness for your age can delay dementia by two years and that you can also live two to three years longer after being diagnosed with dementia,” Tari concluded.