Home » Health News » If You’ve Got Heart Disease, You Need to Do This 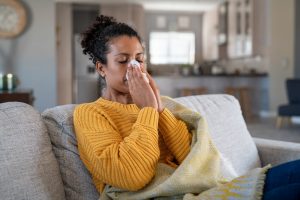 The flu doesn’t get the respect it deserves. Maybe people are just used to it, or many who have had it can deal with its symptoms.

But the flu is a killer.

Experts warn that this year may be extraordinarily dangerous. After many people stayed indoors last flu season to protect themselves from COVID-19, re-entering the world may come with an onslaught of new flu cases. A year off of immunity might come back with a vengeance.

Of course, some groups are more vulnerable. People 65 and older are at higher risk, but they are also far more likely to get vaccinated. Vaccination rates for that demographic are around 80%.

People with heart disease, however, are at high risk for the flu as well. Not only are they at higher risk for serious complications from a flu infection, but they are also likely to experience a significant cardiovascular event because of the flu.

The problem is that this high-risk group is also highly unlikely to be vaccinated if they are under 65.

A recent review has shown that:

The reason likely has to do with an overtaxed immune system that boosts inflammation and puts increased stress on the heart.

Your heart condition matters when it comes to flu risk. If you’ve got CVD or CVD risk factors, be sure to get a flu vaccine, which is currently available at pharmacies and doctors’ offices.