Home » Health News » If You Find Ways to Extend to Your Day, You Could Be Extending Your Waistline 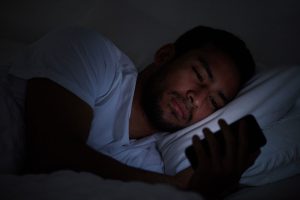 If you’ve got that fear of missing out and choose to make every day a little longer, you could be lengthening the distance around your waist too.

New data is showing that people who decide to stay up late to watch some extra TV, scroll social media, or chat with friends are likely going to put on added fat.

The reason is that those extra hours lead to extra calories.

Gains could be hard to notice on the scale, however, and may dangerously slip by undetected. Researchers said the longer days and added calories didn’t necessarily translate to a jump in weight, but the trouble was more about where it went.

Have you ever heard of visceral fat? It’s the stuff that wraps around your midsection and internal organs. You can’t really see it, yet it’s actually known as the most dangerous type of fat.

This added stress on organs, which is largely invisible, can greatly impact health.

Obviously, if you can shorten your days, you’ll give yourself the best chance of limiting the added food. Choosing to skimp on sleep regularly isn’t going to do anything positive for your health, so try to get to bed consistently every night.

On the occasional nights where you do find yourself staying up a little later, snack sensibly and mindfully. If you’re up on social media or doing something you can easily step away from and not miss anything, go and prepare a healthy snack – or go to bed!

If it’s something that’s keeping you glued to your screen – like a sports game or movie – have something healthy close by.

Food choices can play a major role in where fat, and what kind, settles in.